Sticking to form, host Ellen DeGeneres will reportedly be placed into various scenes (presumably those from Best Picture nominees). Obviously Ellen will be CG’d into royal robes of The Queen, if this is in fact the plan. What else? Jack Nicholson sitting down with Ellen at a back-room table and asking who’s the rat? Ellen clasping a hand grenade to her stomach and blowing her intestines all over the walls of an underground cave, a la Letters From Iwo Jima?

Finke says DeGeneres will be seen dancing with the Happy Feet penguins. (Warner Bros., the producer of both Happy Feet and Ellen’s syndicated series, spent “an enormous amount of money to make this happen,” Finke writes, including hiring Happy Feet director George Miller to coordinate.) Let’s see…have we ever seen a big-name TV star dancing with animated penguins before? 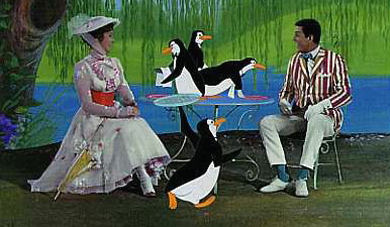