I’m offended by the implications in mainstream reports that Sean Penn is doing a wrong or imprudent thing in visiting Venezuelan president Hugo Chavez, and for applauding the leader’s trashing the U.S. waging of the Iraqi War, and for graciously nodding as Chavez calls him “brave” for urging Americans to impeach President Bush. Just as I’m offended by the constant characterizations of Chavez as some kind of wildcard nutbag in the vein of Iran’s holocaust-denying Mahmoud Ahmadinejad. 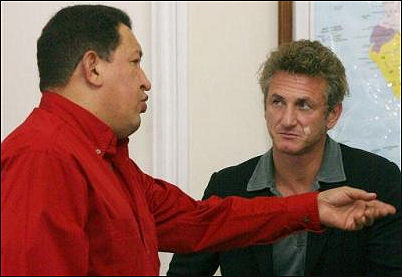 In my book Penn and Chavez are both okay guys with reasonable humanistic attitudes and the courage to speak out against the corporate liars and greed-heads of the world.
I’m not a Chavez scholar or historian, but I’ve frankly been a kind of fan of the guy since seeing Kim Bartley and Donnacha O’Briain‘s The Revolution Will Not Be Televised — a perhaps slanted but still wonderfully rousing documentary about the failed April 2002 right-wing coup against Chavez — at the 2003 Toronto Film Festival. Is Chavez an egotist and a bit of a bully in some respects? Maybe, but politics is a very rough game in Venezuela. I know that he’s always been against the the oil-rich oligarchs in that country and in league with the disenfranchised, and that he’s down on the Bushies and their neocon agenda. In my book that’s a pretty good place to be coming from.
Bartley and O’Briain’s doc basically says that Chavez is supported by the poor and disenfanchised, and is pretty much hated by the moneyed classes. It doesn’t mention anything about his support with the poor drying up because he’s failed to push reforms, so maybe that’s the case now. But the doc persuaded me that the righties tried to blame the leftist Chavez supporters for the shootings that happened before the April ’02 coup attempt, even though right-wing thugs were the clear provocateurs in this situation. The doc contended that the privately run TV companies are total mouthpieces for the oligarchs, and that they didn’t report the truth of what was happening during the counter-coup and in fact spread lies.
Speaking before an auditorium “packed with his red-clad supporters,” Chavez called upon Bush to “withdraw the troops from Iraq…enough already with so much genocide,” according to an AP story by Ian James. “Penn sat near the front, at times applauding and nodding in agreement. He is the latest in a series of celebrities who have visited Caracas, including Danny Glover and Harry Belafonte.”