Lars and the axe

In the view of Huffington Post contributor Nick Antosca, Lars and the Real Girl is “the newest entry in a small subgenre of recent movies: the Endearing Potential Serial Killer Comedy. 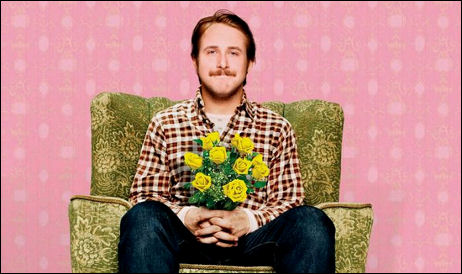 “The only other entry in this subgenre is The 40 Year Old Virgin. I laughed about one and a half times when I watched [that film]… the jokes seemed lame and forced and the writing was amateurish, but the big problem was that Steve Carell‘s character just seemed so fucking creepy. That weird, strained stare…that rabbity way of speaking… those little dolls all over his room. I had the distinct feeling that if he got pushed just far enough, he’d snap and put someone in a crawlspace.

Same with Ryan Gosling‘s moustachioed, vaguely greasy lead character in Lars and the Real Girl. “So Lars is so uncomfortable with human contact that he buys a life-size sex doll made of silicon and weighing as much as a real human to be his girlfriend? Okay. And he brings it to dinner and props it up at the table and calmly talks to it as if it’s talking back, to the alarm of the other dinner guests? Okay. And everyone in the small town decides to pretend that the doll is a real person, because they love Lars so much and humoring his delusion is therapeutic?

Lars is “the more extreme version of the suspension-of-disbelief problem, already written about pretty much everywhere, that plagues a lot of recent comedies,” Antosca writes. “Catherine Keener and Carell in The 40 Year Old Virgin? Dimly plausible…but a stretch. Seth Rogen and Katherine Heigl in Knocked Up? Good movie, but no way. Emma Stone and the obese, sociopathic Jonah Hill character in Superbad? Never.

A voice is telling me Antosca is onto something here. Could this be the beginning of the “Make Lars into a Serial Killer” online movement? Look at that face…look at that moustache. The guy’s a sick deranged fiend. Satan in a flannel shirt! Give him an axe and set him loose upon the town.

If anyone wants to Photoshop any horror film posters with Ryan Gosling front and center, I guarantee I will post them with full credit acknowledgement.