The Envelope‘s Tom O’Neil has bitch-slapped the Los Angeles Film Critic Association for…uhm, not inviting him to cover its awards ceremony on Saturday night as a reporter and for refusing to discuss the matter. I tried to attend the LAFCA awards ceremony a couple of times in the old days (i.e., the mid ’90s), but they always said no. Now they’ve said no to O’Neil also, and the org’s president Lael Lowenstein has declined to explain why or whatever. 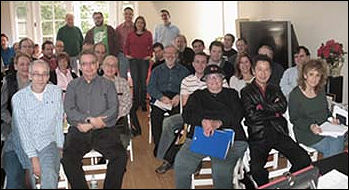 So LAFCA has hermetic tendencies as a group. Leave us alone, no guests, it’s our show. Not very attractive, but not exactly a huge crime either.
“The LAFCA stance is unprecedented,” O’Neil writes. “Outside journalists are invited to cover the awards fete of the New York Film Critics Circle. Everyone’s invited to see the Critics Choice Awards bestowed by the Broadcast Film Critics Association — they just aired on VH1. The Hollywood Foreign Press Association’s Golden Globes gala is, ahem, usually televised — and will be, in truncated form, this Sunday.
“LAFCA policy is irresponsible and indefensible,’ according to former LAFCA president Jack Mathews, who is now film critic of the New York Daily News.”
About a third of the way into the piece O’Neil also hits LAFCA for having lax membership standards. This part is a little more interesting.