For the last few weeks the conventional wisdom has been that the top two contenders for the Best Documentary Feature Oscar are probably Charles Ferguson‘s brilliantly analytical No End in Sight and Sean Fine and Andrea Nix‘s feel-good War/Dance. Last night, however, a friend told me about a fairly stupid-sounding statement from a person who belongs to the Academy’s documentary branch. Or a statement, at least, that indicates a fairly unthoughtful Iraq War subject-matter bias. 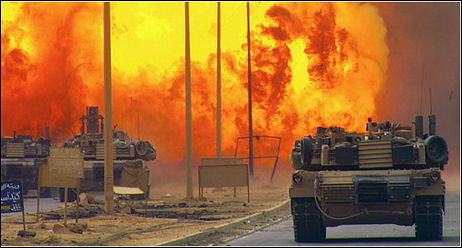 This Academy person believes, I was told, that the three Iraq War-themed docs that are nominated — No End in Sight, Richard Robbins‘ Operation Homecoming and Alex Gibney‘s Taxi to the Dark Side — “basically cancel each other out.”
The guy seems to be saying that they’re all part of the same bowl of soup not just in terms of subject matter, but in terms of tone and viewpoint. He seems to be implying that all three are belly-aching about what a disaster the war has been and still is, and it’s all the same blah-dee-blah and who needs it?
This attitude was recently echoed by Sundance programmer John Cooper in a 1.16 AFP story when he said that “cinema audiences are fatigued by the conflict…filmmakers haven’t said all there is to say about the war in Iraq, but I think audiences are saturated.”
Michael Tucker, co-director of Bullet-Proof Salesman, a doc about an Iraq War profiteer that will show at next month’s South by Southwest, is understandably dismayed by such talk. “Alex Gibney’s film is completely different from Charles Ferguson’s movie, and yet to hear it from the Academy crowd it all comes down to subject,” he says. “It’s no secret that a lot of Iraq War films have sold very few tickets. Grace is Gone made 35 thousand dollars so the word has spread that Iraq movies are commercially unfashionable. But how can a war be out of fashion?”