It was announced during Sundance that Pride and Glory, the Ed Norton-Colin Farrell cop drama that’s been more or less done since last November, had been bumped by New Line into ’09. 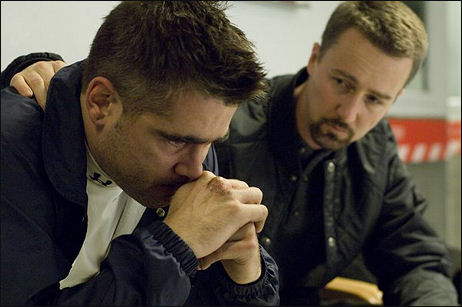 You can tell from the trailer that Pride and Glory is a little boiler-platey, perhaps a little too emphatic and histrionic. My general motto is that any New Line film that costars Noah Emmerich (brother of production chief Tobey Emmerich) is a potential problem. But there doesn’t seem to be anything to fear from director Gavin O’Connor, who did a first-rate job with ’04’s Miracle.
How bad does a film have to be to bump it all the way into ’09? The postponement feels extreme and bizarre. Yesterday Farrell cleared up the mystery with journalists at an In Bruges junket. The problem with Pride and Glory isn’t Pride and Glory, he said, as much as Nicole Kidman and The Golden Compass.
“There’s this rumor going around that [Pride and Glory has been bumped] because it’s a mess or it’s a really bad film,” he began. “I feel the need to kind of speak up, not from my own end but genuinely for Gavin O’Connor because he wrote and directed it. It’s just a really really strong piece, but I think New Line lost the bollocks on The Golden Compass…and they literally don’t have enough money to market things.
“Pride is a tricky one to market anyways. It’s pretty dark…I’ve seen it. Gavin did a great job and you know, Jon Voight is brilliant in it, and Ed [Norton] is great in it and a really strong cast of supporting characters…it’s a really strong piece.”
The main thing is that it’s got Farrell playing another downward-spiral character beset by demons. In my book Farrell is an actor reborn, having found his kwan over the last ear or so by getting under the skin of a pair of anxious, emotionally disshevelled losers in Cassandra’s Dream and In Bruges.