The trailer for Ben Stiller‘s Tropic Thunder is hilarious. It persuades that the film, which Stiller may even be brilliant. Trailers aren’t to be trusted, of course, but this may be an exception. Maybe. I’m now persuaded that two landmark comedies may open in August — this (opening 8.15) and David Gordon Green‘s The Pineapple Express (8.8). 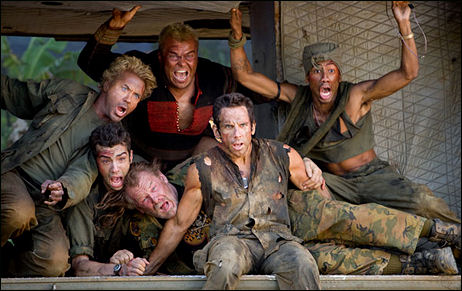 Thunder will almost certainly be a box-office champ. HE reader Judy Barker reports she has friends in Long Beach who went to a sneak [of this film] and the people running things had to show it on two screens to accomodate the crowd. The line was around the block.”
.
Robert Downey‘s performance alone is a take-it-the-banker. It feels like a good guess to put him into the Oscar Balloon for Best Supporting Actor. The ’08 Balloon is nothing but b.s. spitballing at this stage so why not? It could happen if the film is good enough. Possibly. Especially if you consider his being ignored off last year for his Zodiac performance as San Francisco Chronicle journalist Paul Avery.
The Tropic Thunder cast toplines Stiller, Jack Black, Downey, Brandon T. Jackson, Jay Baruchel, Danny McBride, Steve Coogan, Bill Hader and Nick Nolte.
I can’t find an embedded code for the trailer (yet). If anyone has a location, please send.