I’m a sucker for horror comedies, my favorites being Stuart Gordon‘s Re-Animator, the first Dawn of the Dead and, to a lesser extent, Shaun of the Dead. Obviously a guy thing, but funny is funny. I’m therefore susceptible to the remote possibility of Zombie Strippers (Triumph, 4.18) being an agreeable hoot. Remote because it’s almost certainly skanky. 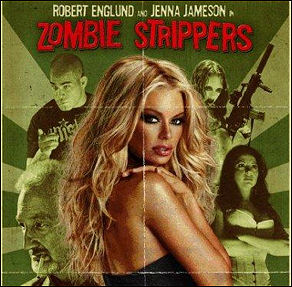 One indication is that the poster has fold lines on it. Is this a Grindhouse imitation thing (i.e., trying to look like a ’70s exploitation film) or did somebody actually scan a poster that had been folded? Either way the art says “low rent.” Another indication is that an e-mailed invitation says it will screen in early April, once. Triumph is…what? Looking to save money?
Robert Englund and Jenna Jameson costar. Englund’s character, a strip-club proprietor, has the following line: “Let’s see if I’ve got this straight. Our best stripper is a reanimated corpse, which feeds on the living flesh of the customers, who in turn, reanimate after death, even if they’re just a f***ing head! And you don’t see this as a problem?”