A 5.29 NBC News story by Dante Chinni calculates that with Bernie Sanders out of the Presidential race, Hillary Clinton‘s lead over Donald Trump, currently at 46% to 43%, would surge to 51% to 43%. 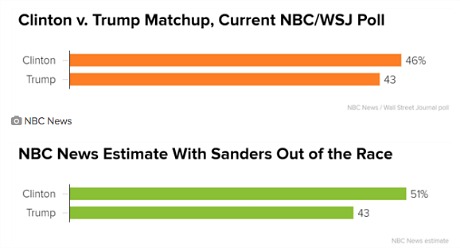 “To get a better look at where the Clinton-Trump race might stand after the nominating dust has settled, we recalculated the latest NBC/WSJ poll with Clinton capturing 70 percent of the Sanders-only vote,” Chinni writes.

“The result [is that] Sanders-only voters are worth an extra five points to Clinton. In the NBC/WSJ poll, Clinton’s advantage over Trump goes from three points to eight points and she leads 51 percent to 43 percent. But the difference holds in other polls as well.