Tom McCarthy‘s The Visitor (Overture, 4.11 limited) is easily among the best films of the year so far — right up there with The Bank Job, Young @Heart, Shine a Light, In Bruges, Taxi to the Dark Side and 4 Months, 3 Weeks & 2 Days. If I’d been more on my game I would have seen it at last January’s Sundance Film Festival, but something obstructed. (I’m telling myself it was the 72-hour flu that got me the night before Heath Ledger was found dead.) 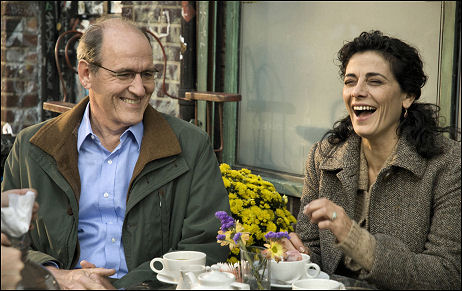 Set mostly in Manhattan, The Visitor is about a dull middle-aged academic (Richard Jenkins) discovering a pair of illegal immigrants (Haaz Sleiman, Danai Gurira) living in his barely-visited New York City apartment (due to a subletting by a con artist), and how he gradually comes to care for them and help out when Sleiman’s character, a Syrian, gets into trouble with the INS.
It’s also about the dull bird, who is called Walter Vale, gradually falling for Sleiman’s beautiful dark-haired mom (Hiam Abbass) when she visits New York to try and help with her son’s situation. The last third of the story is about coping with the threat of a deportation while love gently blooms — a mixture of Kafka and alpha.
Shot on a shoestring, The Visitor is a modest but fully realized middle-aged love story that’s about a lot more than just a man and a woman finding each other. It’s about heart and music and beating a native drum. It’s also about post-9/11 bureaucratic paranoia, and about the shedding of crusty skin. It’s exceptional in the way that it unfolds with elegance and simplicity from start to finish. It touches precisely because it doesn’t seem to try all that hard. McCarthy just ladles it out, pouring by pouring. 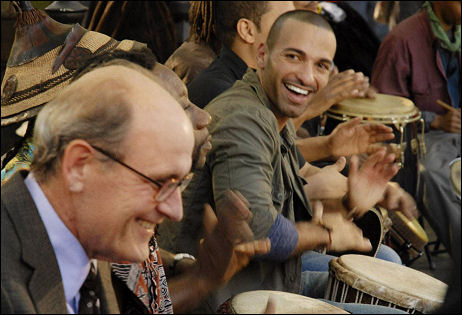 And it has two award-quality performances from Jenkins and Abbass that will almost certainly be remembered at year’s end. Jenkins’ name may not ring a bell, but you definitely know his bald head, lean face and sadly creased eyes. He plays it way down at first — curt, glum , inexpressive — but gradually the pores open. His emotionally muffled college professor experiences one of those spiritual growth spurts that small movies specialize in — ones that enploy just the right amounts of skill and suppressed feeling. Jenkins has achieved the same kind of thing that Peter Reigert managed in Local Hero; ditto Marianne Sagebrecht in Baghdad Cafe.
The Israeli-born Abbass is almost as much of a revelation. She radiates warmth, hurt, sadness, maturity, sensuality.
Almost every critic has fallen for The Visitor, which, of course, means nothing in terms of your average moviegoer wanting to see it or not. The situation is further complicated by the fact that McCarthy’s decision to give the lead role to Jenkins, a character actor whose best role before this was the gay FBI agent in Flirting with Disaster, is both an inspiration and a problem.
You know that the Average Joe is going to go “Richard who?” Jenkins has achieved a career triumph here, but Jack Nicholson in Terms of Endearment he’s not. The Visitor isn’t that kind of movie, and Walter Vale isn’t that kind of role. How interested are you in seeing a love story starring the balding clerk from your local DMV or the manager of the supermarket just down the street? When it comes to stories about older folks scratching that itch, moviegoers tend to respond more easily to middle-aged actors with rascally vigor and charm. And yet what happens in The Visitor really and truly kicks in. You’ve got to see it to believe it. 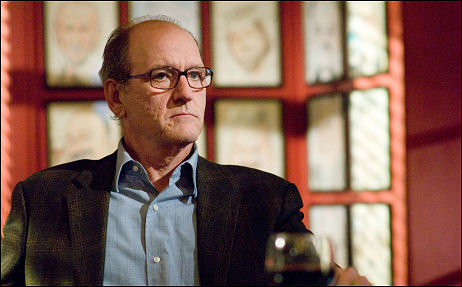 Overture is facing an uphill marketing struggle, but The Visitor has the kind of heart and craft that mature moviegoers are always looking for. Here’s hoping that the ding-dongs who refuse to read reviews or consider the recommendations of online columnists like myself will at least listen to their friends who will hopefully see The Visitor and tell them to get off their backsides and go. Unless, of course, their friends are just as determined to avoid reading about movies as they are.
This is McCarthy’s sophomore effort following ’03’s The Station Agent, which he also wrote as well as directed. He’s a fine actor also. He played the journalist Scott Templeton in The Wire and the dutiful Bradley son in Flags of Our Fathers. Besides his promotional chores on The Visitor, he’s currently filming Tony Gilroy‘s Duplicity.