No Chance in Hell

Near the end of Errol Morris‘s Standard Operating Procedure (Sony Classics, 4.25 NYC, 5.2 LA), which examines the whys and the particulars of the Abu Ghraib prisoner-torture scandal, a middle-aged, non-military investigator who looked into the matter while stationed in Iraq (and apparently remained there for a prolonged period), offers a conclusion about the overall Iraq War effort that is blunt, bitter and shorn of any semblance of spin. It last 43 seconds. 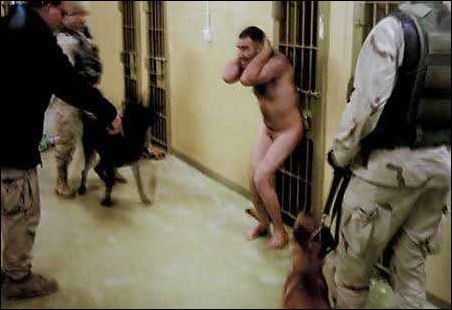 Listen to it right here. He mentions the Abu Ghraib scandal first, but he quickly shifts into an appraisal of the U.S. military mission in Iraq. I’ve never heard a veteran of that inferno sum things up quite so succinctly: “There’s not a snowball’s chance in hell you can fix any of that,” he says. “If we leave, they’re killing each other and they’re not killing us. If we stay, they’re killing each other and they’re killing us. That’s the end result of this whole fuckin’ debacle.”
I’d like to see this guy talk to John McCain and listen to McCain tell him, “No, the surge is working…this is the central essential conflict of our times….we have to stay and see this through,” etc. I’d like to hear what this guy says back to McCain. I’d like to see the expression on his face as he does this.