Richard Stayton, editor of Written By — the magazine of the Writers Guild — has written an editorial lamenting the trashing of The Counselor. In so doing he chastises those who reported (i.e., passed along) the belief that The Counselor is Cormac McCarthy‘s first screenplay. It isn’t. In their mostly negative reviews, critics “changed an all-too-frequent reaction — ignore the script — into a game of Get The Screenwriter,” Stayton writes. “Never before in the history of American film have critics mauled a screenwriter with such extremes of fear and loathing.” He acknowledges the supportive words written by N.Y. Times critic Manohla Dargis, Variety‘s Scott Foundas and myself, among others.

The issues also contains a piece by Counselor supporter F.X. Feeney about The Black & The White, the Herblock documentary directed by Michael Stevens. 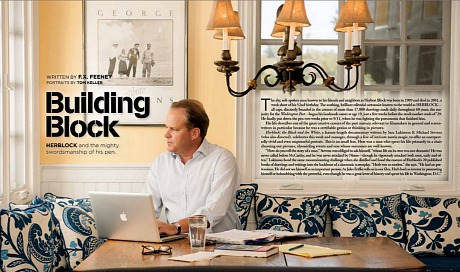