If I’d been allowed to interview Nebraska‘s Bruce Dern (which isn’t going to happen), I would have mentioned the following opinions and asked him for a response. 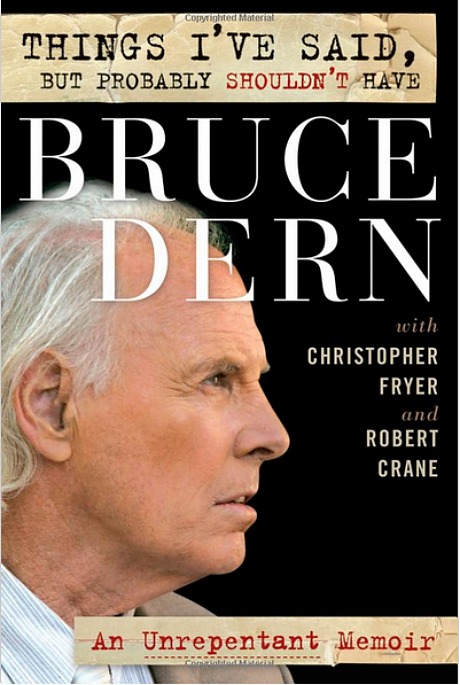 1. In his 2007 autobiography “Things I’ve Said, but Probably Shouldn’t Have: An Unrepentant Memoir,” Dern writes that director Sydney Pollack brought tears to his eyes when he told Dern, “You are not a leading man.” This according to Variety‘s Ramin Satoodeh in an 11.15 Dern interview. What? Nobody ever regarded Dern as leading-man material. Nobody. I’m astonished that Dern would have ever argued that he’s a leading man waiting to happen. Dern has always played sardonic, occasionally angry (and occasionally even fruitloopish) guys with hair-trigger temperaments. He is nothing if not assertive in this respect. One of my favorite supporting Dern performances is his wackjob soldier in Pollack’s Castle Keep. He’s hilarious in that film.

2. Dern’s performance as Woody in Nebraska stands out for one reason and one reason alone. I’m talking about that moment when he’s riding shotgun in that newly purchased pickup truck that Will Forte, portraying his son, has bought him. For a few seconds Dern looks over at Forte and appears to be close to saying something along the lines of “Thanks, son.” Or perhaps he’ll just half smile at Forte. He does neither. The fact that Dern doesn’t go there — that is ten times more powerful. This is why the performance works. Without it, not so much.

3. In a 10.24 piece called “Year’s Most Hummable Theme,” I tried to get a little enthusiasm going about Mark Orton‘s Nebraska score. Nobody said boo. Maybe they will now that Nebraska is playing commercially. What got me was the main theme, which is called “Their Pie” (and which is contained in two tracks on the Nebraska soundtrack album, which streets on 11.19). Here’s the opener and the closer. Somehow the music expresses what the film is about better than the film. (Or just as eloquently.) “I hear it and somehow Bruce Dern‘s performances and the black-and-white photography and the pickup-truck sequence at the end…it all comes together,” I wrote.