When Avatar Was Young

In a piece that summarizes James Cameron‘s Project 880, the 113-page scriptment that eventually became Avatar, CHUD’s Devin Faraci points out a difference in a certain scene that really got me. I’d skimmed through an ADD version of the scriptment two or three years ago, but I’d forgotten this. 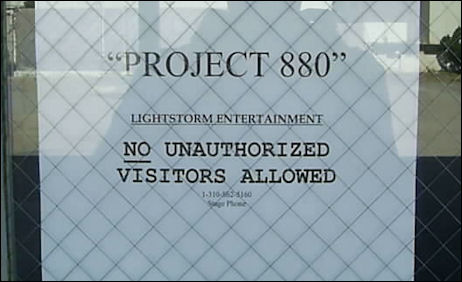 In Avatar, the paraplegic Jake Sully (Sam Worthington) isn’t just excited by having the use of his legs again when he first awakens inside his new ten-foot-tall blue Avatar body — he’s exalted and blissed out, and impulsively bolts the laboratory so he can run outside and feel the new muscles. The reigning emotion is “whoo-hoo testosterone!”

But in Project 880, says Faraci, Jake — Josh in the scriptment — “can barely stand, and his motor skills are weak. But when he gets on his feet and begins walking he has a very different reaction than Jake Sully — he cries. It’s a beautiful character revelation. Jake acts like a kid who had finally been let out of a car after a long ride; Josh acts like someone who never thought he would walk again.”

I was impatient and almost irritated with the Avatar version when I first saw it in San Diego, and while I understand Jake’s feelings of exuberance I doubted that he would act so rashly, like some 16 year-old kid driving a muscle car for the first time. But I would have bought his weeping with joy and relief if Cameron had chosen to dramatize this instead. I’m sorry that he didn’t.

The plot of Project 880 is much denser than Avatar‘s, with many more characters and tangents and a fair amount of back-story. As Faraci acknowledges, if Cameron had filmed all of the extra material Avatar would have probably run five hours — and would have probably cost $450 or $500 million to make instead of $300 million or whatever Avatar actually cost.

Faraci’s summary of the Project 880 plot points are as follows:

* Earth and its environmental problems are explored

* There is no unobtainium beneath Hometree. The military just wants to wipe out the local Na’vi to send a message to all the tribes that they must be obeyed.

* It’s revealed the Avatar program exists to train Na’vi to be an indigenous workforce for the corporation, as it’s so expensive to send human workers

* There are more humans, including a bioethics officer on the take, a video journalist, a head of the Avatar program and a second military dickwad

* There is an Avatar controller who is burnt out because his Avatar died with him in it. He committed Avatar suicide because he had fallen in love with a Na’vi girl who had been killed by the military

* The Avatars have a Na’vi guide named N’Deh, who’s slipping the high hard one to Grace.

* Sully gains the Na’vi trust by being a member of the community. He also excels in a major hunt

* Pandora is a conscious entity that sees the humans as a virus, and which has been mobilizing the plants and animals to attack all along because it wanted to force the humans to leave.

“I would liked to have seen a movie version of Project 880,” Faraci writes. I too would have enjoyed more of what the scriptment has, but not too much more. I mean, I wouldn’t want to sit through a futuristic, ass-punishing Lord of The Rings: Return of the Avatar running four or five hours.

You have to understand where scifi-fantasy geeks like Faraci are coming from. One of the reasons they went hog-wild for Peter Jackson‘s Rings trilogy was its expansiveness. These guys live for length, texture, details, exposition and subcurrents in exotic imaginary worlds. They love layered and dense…yum! The more characters and extra subplots and backstory, the better. Throw it all in there, pile it on, explore the tangents, etc.

“I can’t say for sure why Cameron so severely streamlined his own story, but 880 feels like a Cameron film,” he writes, “while Avatar feels like the footnotes of that.

“Many of the problems I had with Avatar‘s story are addressed in Project 880‘s scriptment. I like Josh Sully better than Jake, although I suspect my biggest problem with the character lies in Sam Worthington. But other characters have more flesh, and the story unfolds at a pace that feels interesting and not like it’s on rails.

“Obviously this scriptment would have made a five-hour movie. Things needed to be cut. I just wish Cameron had been able to keep the decent story and rounded characters along with his deeply designed world. But when you’re spending that much money, it’s the story and characters that get canned before the FX.”