Soft non-conclusive reading — that’s what you’d have to call Peter Wilson‘s profile of artist and Nowhere Boy director Sam Wood in The Australian. All of the basic story points, and no hint about how Nowhere Boy has actually settled in thus far. I have no idea what Wilson means when he calls it “a well told, conventional treatment of a story that has an important part to play in Western popular culture,” but I can put it more bluntly, if you care to read. 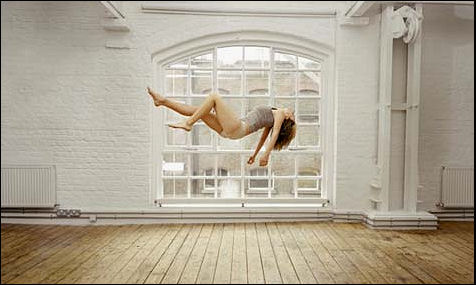 Nowhere Boy, I wrote on 10.29.29, is “a marginally effective, vaguely muffled chick-flick account of John Lennon‘s teenage years in Liverpool, circa 1956 to ’60. I’m not calling it dull, but ‘somewhat underwhelming’ is a fair way to put it, I think. I respond best to films about transcendent, climb-out-of-it responses to problems rather than ones that mainly portray the muck and the glue and the grief of things. And Nowhere Boy‘s somewhat feminized, all-he-needs-is-love story just didn’t turn me on.”

Wilson indicates why Wood’s movie more or less de-balls Lennon and turns him into a looking-for-love girlyman. Like Lennon, Wood also had a vanished mom who turned out to be living not far from the home she was raised in. Wilson also reports that she once exhibited a collection of photos called “Crying Men,” showing an assortment of Hollywood guys getting all sniffly.

But he doesn’t even glance at Wood’s decision to cast Thomas Brodie Sangster — a pint-sized, pencil-necked, chipmunk-faced actor — to play Paul McCartney. This, trust me, is one of the most appallingly “off” casting decisions in motion picture history.

Mainly Wilson’s piece is about bing, bing, binga-binga, bing. Wood has done this, and formerly did that. Highly regarded gallery artist, blah, blah. Married to that rich guy, divorced, and now engaged to this younger one. Been there, now here. Blah, blah, blah, blah. Give me a day and I could tap out an imaginary profile piece of anyone in this vein. I could write a profile of Lee Harvey Oswald without gussing anything up — I would just omit reportings about his alleged activities on 11.22.63 and his murder on 11.25, and it would be more or less the same kind of article as the one Wilson has written.