Titled “Trades Gone Wilde,” Rushfield basically adopts a woke/#MeToo posture by accusing Variety and others of a semblance of old-school sexism by giving Wilde a much harder time than they would a male director in a similar situation.

Excerpt #1: “Imagine a male director was having a somewhat messy divorce. And had a relationship with an actress on his film, which annoyed another one of the stars who felt he wasn’t getting enough attention. Would this be a story that the trades would even mention? It would be more of a story on the set where that didn’t happen.” [HE recalls how Kirk Douglas shared a certain resentment over director Richard Quine favoring girlfriend Kim Novak during filming of 1960’s Strangers When We Meet.]

Excerpt #3: “Of course, I wish that every time Olivia Wilde is asked [questions about her on-set affair with Styles and everything that has come from that] she would ask the reporter to stand up, repeat their names and the name of the editor who assigned them to fly across the world and ask this question and challenge them to reveal when they’ve ever asked a male director a question like that.” 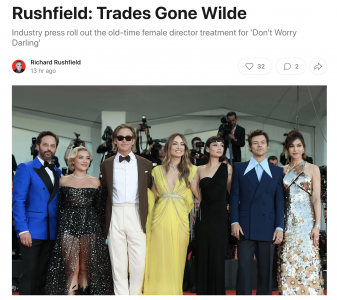 HE to Rushfield: Strong piece, well-written, striking viewpoint. But you side-stepped what I feel is a basic issue.

I agree that it’s no biggie if Wilde decided to have an on-set affair with Styles. Happens all the time, right? And yes, Don’t Worry Darling will probably make decent coin. The consensus is that it’s not very good but who cares as long as it brings in a handsome profit, right?

But as you well know, the most interesting aspect of the whole mishegoss is Pugh’s frosty behavior. That’s the thing, the all of it. Pugh, not Wilde.

What leading lady or man has ever conveyed to certain parties, weeks or months in advance of a film’s release, that he/she strongly disapproves of an on-set affair? Can you imagine Harrison Ford saying he didn’t approve of Spielberg and Capshaw during the making of Indiana Jones and the Temple of Doom? Or one of the costars of Blood Simple (Jon Getz or Dan Hedaya) saying he didn’t approve of Joel Coen and Frances McDormand having it off during principal photography?

Who gives a shit if a name-brand director (married or not) has an affair with a star or costar during shooting? Certainly nobody who’s been around. It happens all the time. And yet since this whole thing blew up in July, Pugh has made no secret of her disdain for Wilde — not just the affair-with-Styles thing but the kind of film she was making**. And she’s kept it going. She wouldn’t get on the phone with Variety for a Wilde profile, and wouldn’t participate in the Venice press conference — only the Venice red carpet.

Pugh could have made the whole thing go away by simply pretending to be on good terms with Wilde (i.e., saying nice things on social media, making friendly eye contact with Wilde during the Venice Film Festival) but she refused.

An adult would have shrugged the Wilde-Styles affair off (“Whatever, none of my business, all’s fair in love and war”) and simply focused on delivering a strong performance. But Pugh threw a big judgmental hissy fit (second only to Keke Palmer‘s hissy fit over Bill Murray‘s alleged hair-tugging), and in so doing made this thing into a huge media mishegoss. There would have been nothing to write about if Pugh had just turned the other cheek and gone all noblesse oblige.

Jordan Ruimy: “Pugh’s beef seems to be about the awkwardness of having Wilde’s then-partner Jason Sudeikis visiting the set with their two kids while everyone knew she was cheating on him.”

HE: “Okay, sure, I get it. But that’s life. People cheat, hearts get broken, love stinks & marriages sometimes collapse under the burden of this. But when did the affair ignite? Sometime around October of ‘20, which is when filming began. And Pugh is STILL hanging onto this resentment, nearly two years later? You gotta move on and be a pro.”

Ruimy: “I suspect Pugh was going to let go of the feud until that video message from Wilde to Shia leaked online. In it Wilde basically says it’s Pugh’s fault that Shia decided to leave the film, plus she calls her the condescending name of ‘Miss Flo.'”

HE: “Probably but who knows?”

Ruimy: “I hope Ryan Murphy makes a TV miniseries out of this melodrama.”

HE: “A five-part Miss Flo Disapproves miniseries from Murphy is a GREAT idea! Did you post this? Everyone would totally watch it.”

** Pugh to Harper’s Bazaar: “When it’s reduced to your sex scenes, or to watch the most famous man in the world go down on someone, it’s not why we do it. It’s not why I’m in this industry. Obviously, the nature of hiring the most famous pop star in the world, you’re going to have conversations like that. That’s just not what I’m going to be discussing because [this movie is] bigger and better than that. And the people who made it are bigger and better than that.”