The Fabelmans (Universal, 11.11) is about the emotionally formative, occasionally traumatic upbringing of one Steven Spielberg (i.e., “Sammy Fabelman”) from age 7 to 19, or something in that region. And I really wish I could see it this Saturday in Toronto.

A Best Actress nom for Michelle Williams‘ performance as Leah, Sammy’s mom, seems pretty much assured. Along with a presumed Best Picture nom, and perhaps a nom for what may be composer John Williams‘ final score.

A few weeks ago I was told that Judd Hirsch‘s turn as an elderly uncle on Leah’s side of the family might generate Best Supporting Actor talk. Mostly prompted, I was told, by the tender nature of a scene between Hirsch and young Sammy, which “hits home.”

Witness: “Anyone who grew up watching movies will be a sure bet to love this. It’s a film-critic-friendly movie. It’s made for people of the film faith. I enjoyed it tremendously, and this is so rare.

“A significant portion of the drama in the Arizona section of the film is Leah and “Uncle” Benny (Seth Rogen) having an affair.

“Prior to Sammy’s final year in high school the family moves to Northern California, and that’s where most of the anti-Semitism is shown. Sammy is called ‘kike’ and ‘bagelman’ and gets punched in the face. Jocks leave a bagel in his locker and the words ‘Jew hole’ are scrawled on his locker door.”

What will Telluride’s “whoa whoa” guy say when he watches this portion of the film?

I won’t discuss the allegedly tasty David Lynch-as-John Ford finale, but it sounds like a great wrap-up. 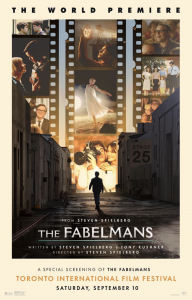 September 7, 2022by Jeffrey Wells49 Comments
« Previous post
When A Film Has Issues
Next post »
Pugh Created & Sustained The Mishegoss