For me the standout event at last night’s Palm Springs Film Festival awards gala was the appearance of Still Alice‘s Julianne Moore, who was conspicuously absent from the Oscar campaign trail all through the 2014 Oscar season. Her campaign strategist no doubt instructed that the “she’s due” buzz, which began during last September’s Toronto Film Festival, was all they needed and so let well enough alone. With absolutely no one anticipating flotation from Alice, a Lifetime disease-coping movie, the best approach would be to do nothing at all until January when things kick off in earnest with the Palm Springs Film Festival, the Golden Globes, the BFCA awards, etc. Team Moore knows that the competition isn’t that strong (with the exception of Cake‘s Jennifer Aniston, who’s running the most successful go-for-it campaign) and that they’ll almost certainly coast to a win. But the rest of us are bored. It would be far more engaging if at least one other contender posed some kind of threat to Moore…alas, no. Then again Moore’s speech last night was spirited, relaxed…a bull’s-eye. 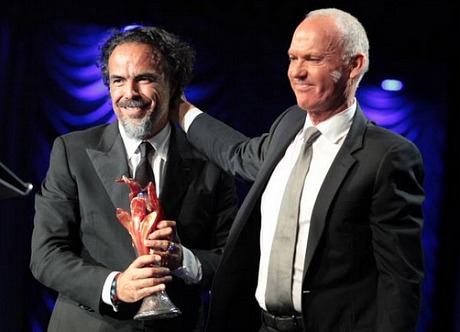 I sat through the whole thing, man…four and a half hours of chit-chatting and smiling and eating the salad and and dessert and the mashy meat entree, grinding it all out in that huge, cavernous convention hall, dressed in my tuxedo-like black suit and tweeting now and then at table 1302. (In Contention‘s Kris Tapley sat to my right.) The venue, as always, was basically a tryout venue for speeches that everyone will be giving over the next seven weeks or so, and there was something to be said, naturally, for hearing them for the first time.

Yes, I could have filed about this last night but it was just a pre-awards thing…a big, black-tie hoopla event. This morning was just as good. I felt like reading a book last night before crashing.

Let no one say that the Palm Springs Int’l Film Festival organizers don’t spend the money or go full swank. They do and then some. But I have to say that Palm Springs itself was a much more charming and homey-ish place…a far less corporate environment when I first came here back in the early ’80s. The architecture of the store fronts, hotels and condos is so corporately uniform and dull and lacking in personality. It’s almost as if the architects’ deliberate intention was to sedate the tourists.

A special shout-out and thank you to B/W/R’s Lauren Peteroy and Steven Wilson for being extra-helpful with tickets and passes and whatnot. Thanks, guys…seriously.

It’s now 8:15 am…already the pressure is on. I’m planning to attend a Scott Feinberg q & a with foreign-film directors at the Palm Canyon theatre at 9:30 am, followed by a Variety-sponsored Ten Directors To Watch brunch at the Parker Palm Springs at 11 am.