While chatting earlier today on the Armchair Expert podcast, Quentin Tarantino announced that he’s bought the beloved Vista Theatre — an historic 98-year-old venue between the Los Feliz and Silverlake regions of Los Angeles. The single-screen, 400-seat Vista is easily the most attractively designed and aesthetically pleasing commercial theatre in Los Angeles. It’s a work of art.

I’ve just realized I haven’t been to the Vista since catching a special midnight screening of Jennifer Kent‘s The Babadook on 12.7.14, which included a special introduction by William Friedkin.

With the Vista still shuttered by the pandemic, Tarantino said “we’ll probably open it up around Christmas time.” 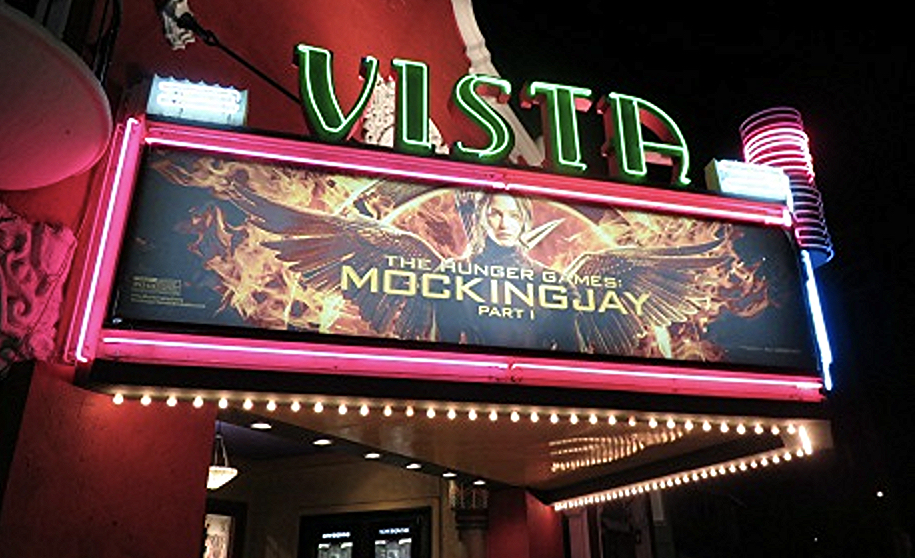 HE to QT: Why six months from now? Why not Labor Day, which is eight weeks hence? Theatrical is bouncing back — why wait for six months? Failing that, why not October 1st? What do you need to do to the place improvement-wise? It’s been in reasonably good shape for several years now, no?

Tarantino stressed that like The New Beverly, the Vista will show “only film…it won’t be a revival house…we’ll show new movies that come out where they give us a film print. It’s not going to be like the New Beverly [Cinema]. The New Beverly has its own vibe. The Vista is like a crown jewel kind of thing. We’ll show older films, but it will be like you can hold a four-night engagement.”

What he seems to be saying is that The Vista will present films that will combine the aesthetic of (a) the current Westside Pavillion Landmark, but only if the distributor supplies a 35mm print, and (b) the Nuart, which sometimes will show older films along with European or Xtreme indie fare. Yes, 35mm prints of new films are still being made (or so I hear) but Tarantino knows that distributors are more or less out of the 35mm celluloid business, and that it’s

HE to QT: The New Beverly’s film-only policy is cool on one level, but a dying sentimental fetish on another. It’s fine to insist on a pure-celluloid experience, and being able to show (and savor) a mint-condition print can be wonderful thing. But it can just as easily be a drag. Digital is the way of things now, and there’s something needlessly stubborn about insisting that film is the only way to go.

Every time I contemplate going to the New Beverly, I think back to a seven-year-old showing of the ’62 Mutiny on the Bounty. I wrote about this in a 7.16.14 post titled “New Beverly Pits“:

“I imagined that Marlon Brando’s Bounty might look better than I expected, and so, like a moron, I went there tonight and took a seat in the second row. It looked like dogshit. Dupey, brownish tones, substandard projection lighting (I’d say around 8 foot lamberts, or 6 lower than the ASCAP standard) and nowhere near wide enough. The New Beverly doesn’t even present a true Scope aspect ratio (i.e., 2.35:1). It looked to me like 2.25:1.

“Robert Surtees shot Bounty in Ultra Panavision 70 (2.76:1), and his work looks terrific on the Warner Home Video Bluray. The New Beverly not only took a dump on Surtees’ efforts tonight, but on everyone who paid money to see their abysmal 35mm presentation. I left after ten minutes. My own damn fault.”

Another bummer happened at an 11.2.14 screening of Blow-Up at the Aero. Here’s what I wrote the following day — the piece was titled “Pinkish, Degraded, Worse For Wear.”

“As noted, I went to see Michelangelo Antonioini‘s Blow-Up last night at the Aero. Also as noted, I own a Vudu digital stream of this classic 1966 film, and it looks quite perfect. No scratches, no pops, no faded colors, no reel-change marks…better than any 35mm print ever looked.

“As luck would have it, the Aero didn’t show a DCP but a 35mm print, and a bum one at that. I knew they were showing 35mm going in, but in the back of my mind I have this Tarantino-ish belief that 35mm prints are somehow more vivid or detailed or movie-ish on some level. Well, not always, and certainly not this time.

“I felt like a chump watching this beater of a print, which was slightly reddish to boot. I was muttering to myself, ‘The Aero has gotten people to actually pay money to see this crappy-looking thing?’ The sound was shitty for the most part — no accentuated treble or bass, like a p.a. system at a high school. The film was focused but it never delivered sharp images, or at least not what I call sharp images. And the scratches and marks, especially as the reel changes approached, were irksome as fuck. And the way the grass looked a bit faded and brownish and the way the blacks looked a bit reddish and the way everyone’s skin seemed just a little too pink…it was a miserable experience.

“Antonioni’s ghost would have been appalled. I left around the one-hour mark. I have better things to do with my evenings.”