Not Quite A Mea Culpa 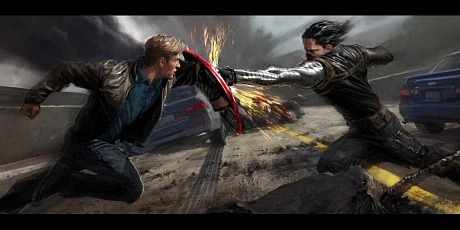 And the entire cast gets it right. Chris Evans, Scarlett Johansson, Sebastian Stan, Anthony Mackie, Frank Grillo, Samuel L. Jackson are right in the groove, but the stand-out (for me anyway) is Robert Redford in bad-guy mode — a career first if you don’t count Indecent Proposal. As Alexander Pierce, a corporate governmental smoothie, Redford plays it straight and grounded — a completely cool, pragmatic, self-aware, bullshit-averse man of substance and conviction as far as that goes. And he’s been given more than a few choice lines. (There’s one about Iron Man that’s hilarious.)

This is a genre film so you can’t get too excited, but the focus, craft and general efficiency that have gone into Winter Soldier are truly exceptional and top-of-the-line. If you’re going to do this kind of crap, this is how you do it.

Comic-book movies are always trying to top the last one and so they pour on that much more money and edge and excitement and technology and CG wallop, and this one certainly does that. How is JJ Abrams going to compete with his forthcoming Star Wars sequel? He delivered a similar type of whammo super-colossal climax in his last Star Trek film, and I was asking myself as I sat there last night, “How much bigger, faster, romp-stompier and more FX-persuasive can movies like this get? And to what end when they reach the next level?”

The humanity and true-blue character issues in Johnston’s version aren’t quite as pronounced in Winter Soldier, but they’re certainly tangible. This is a film about delivering the CG comic-book package with extra kapow and a current of ’70s-style paranoia, but a portion (at least in the third act) is about humanity and compassion and…well, let’s not get carried away. But in the context of a big superhero film, soul and empathy ain’t hay.