There’s a line spoken by Steven Keats in The Friends of Eddie Coyle (’73): “Life is hard, man, but it’s harder if you’re stupid.” (Here‘s the mp3.) By the same token it’s hard to make a half-decent crime film but it’s really hard to enjoy it if the leads are drop-dead stupid.

I don’t mean characters who could use a few more brain cells or are slow on the pickup. I mean characters who haven’t the common sense that God gave monkeys. This is a problem. I have to find a way to bond or empathize with characters if I’m going to spend a couple of hours with them, or at least make some sense of their motives. I’d like to able to roll with people who aren’t as smart as giraffes or wildbeests, but it’s not in me.

Imagine a couple of wildebeests, a male and a female who are….well, maybe a little impetuous but definitely crazy in love with each other. One afternoon they leave their herd and trot over to a shaded area where a family of lions are taking an afternoon snooze. For whatever dumbfuck reason they start taunting the lions, spitting and kicking and defecating. At first the lions are too bewildered to respond, but they eventually get up and tackle the wildebeests and eat them. Now that‘s a tragedy!

If someone were to make a documentary about this event, the copy line would be “those wildebeests might have done a dumb thing but they were so in love with each other!”

Raymond De Felitta‘s Rob The Mob (Millenium, 3.18 in NY, 3.25 in LA) is a fact-based story about those wildebeests. Crazy, irrepressible animals who lived in Ozone, Queens in 1992. Their names were Thomas and Rosemarie Uva (played by Michael Pitt and Broadway stage enchilada Nina Arianda). They had criminal records, drug issues (at least on Thomas’s part) and hell-bent inclinations, and so they decided to augment their income as bill collectors by knocking off a series of mafia social clubs. Insane behavior. Death wish.

After hitting a few of these mafia dens and obviously pissing off the goombahs (particularly a don played by Andy Garcia and a capo played by Michael Rispoli) and being written about by a Manhattan tabloid reporter (brilliantly portrayed and in fact inhabited by Ray Romano) and being dubbed “Bonnie and Clyde” and arousing the interest of some Feds who are wiretapping the mobsters, Thomas and Rosemarie got whacked but good. They each took three or four bullets in the head. Sic semper moronis.

De Felitta has said that “it would have been too silly if you made up a story like this.” I’ll allow that Rob The Mob is a bit more intriguing if you know it’s fact-based, but it’s still about a couple of cretins.

It’s quite irritating that De Felitta obviously encouraged Pitt and Arianda to emphasize their lovesick behavior by way of…what do you call them, acting-class exercises? Always with the giddy, giggly stuff. Sometimes sweet, more often primitive. Almost always “acting” and rarely just being. There’s a Coney Island scene in which they’re goofing around near a roller coaster on a rainy day, and of course Pitt jumps right into a large puddle and splashes around with his shoes and socks on. This is what actors do when they’re trying to be spirited and colorful. You can smell the effort a mile away, and once that happens the realism goes right out the window. 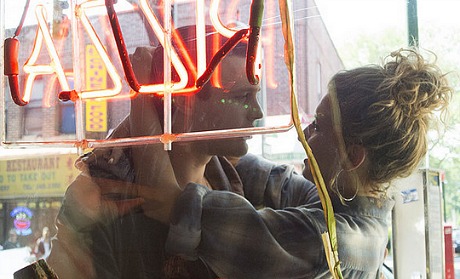 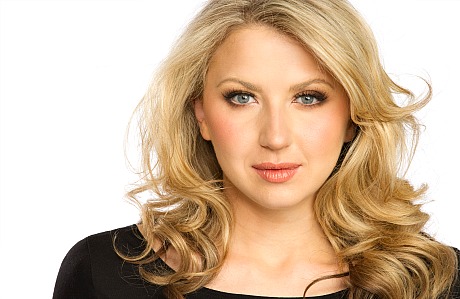 There’s a ridiculous moment when Pitt pulls his mask off as he’s robbing one of the clubs. Wait, wait…what? He lets the mafia guys see his face? Why doesn’t he pass out copies of his driver’s license while he’s at it? Then he runs out with his bag of loot and suddenly the passenger door is locked and Nina, the getaway driver, can’t open it from the inside and then the inside door latch falls off. And then Nina decides that the car has to do a squealing 180 before getting the hell out of there. Who does that? And who uses their own car as a getaway vehicle? You steal a car and then torch it after the job’s done. The movie is full of stupid shit like this.

In reality it took most of 1992 for mob assassins to catch up with Thomas and Rosemarie.

I’m not a fan of the way De Felitta shoots their death scene. It happens at night (even though it happened in broad daylight in actuality) and he shoots it semi-lyrically with red mist and red light flooding the car inside and out, but you never see an actual shooting. We’re given a dreamy impression of one because…what, DeFelitta felt too much affection for Thomas and Rosemarie to depict what actually happened? Scorsese didn’t pull punches when his gang guys got whacked in Goodfellas. Arthur Penn didn’t pretty it up when Warren Beatty and Faye Dunaway went down in a hail of bullets — the opposite, in fact.

And then DeFelitta doubles-down on this soft-hearted approach by showing a photo of the real Thomas and Rosemarie (darker hair, more “borough” looking) with an epitaph that says they were “murdered.” Murdered? They obviously committed suicide. They just came up with a way of doing it that didn’t require pulling the trigger themselves.

Ray Romano delivers far and away the best performance. Low-key, totally in the moment, in the scene, never “acting.”

Arianda is very pistol-hot and live-wire. You can see how her sassy energy would be fantastic on-stage. So she’s got the pizazz but in a movie you have to dial that shit down a bit. And you need to find a better written part than Rosemarie, and, in this instance, a director who wants to do more than present your irrepressible spunk to the audience and say to them, “Do you get what a force of nature this character was and, more to the point, this particular actress is? She’s terrific, isn’t she?”

Rob The Mob is not a “bad” film. It’s reasonably decent one in many respects. I would give it…what, a 7 or a 7.5? Something like that. De Felitta is not a bum or a journeyman by any stretch. He’s a New York-area humanist. He directed Two Family House (’00), a delicate, emotionally affecting “borough” movie that featured Rispoli as the male lead. It’s still one of my all-time favorite Sundance films. (I remember talking to De Felitta and costar Kathrine Narducci at an after-party for it.) My Rob The Mob problem is that De Felitta is wasting his time trying to get me to fall for Thomas and Rosemarie and root for them. I spent the entire time hoping that the mob guys will find and kill them. Satisfaction comes too late. 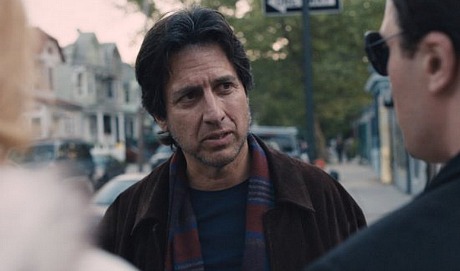 March 20, 2014by Jeffrey Wells17 Comments
« Previous post
Not Quite A Mea Culpa
Next post »
’70s Paranoia for Fanboys