Reacting to Hillary and booing

What were those two pep-rally booing incidents about during last night’s debate? Barack Obama got booed when he got into a tussle with Hillary Clinton about social security taxes and said “this is the kind of thing that I would expect from Mitt Romney or Rudy Giuliani where we start playing with numbers in order to try to make a point.” John Edwards also got hissed when he got in a shot at Clinton for her staff having recently planted questions. 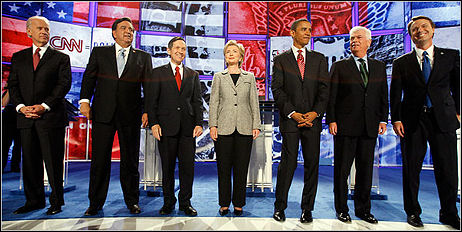 Hillary’s supporters were obviously organized and out in force, but booing is a goon-squad tactic To me last night’s boos seemed to be saying, “Hey, don’t pick on her! Be a gentleman and show some class!” Can anyone imagine Obama’s or Edwards’ supporters booing Hillary if she were to score a point against them? Wouldn’t happen. Now I have another reason why I don’t like her.

I so dislike Clinton, in fact, that even though I agree with her and know she’s a tough operator and would do a pretty good job despite her political parsings, her brittleness and her divisive personality, I would actually be tempted to vote for Fred Thompson if he becomes the Republican nominee. Tempted, I say. Not because I agree with his conservative Republican views and the kneejerk xenophobia that sometimes goes with that, but because at the end of the day he seems like a reasonable human being with a kindly, down-home, pickup-truck attitude about things.

My God…that was the single lamest thing I’ve ever written in my life about political candidates. All my life I’ve been knocking people who vote for candidate X o rY because they have the most appealing Dating Game personality, and here I am admitting that it’s conceivable (thought not likely) that I might actually vote for a Republican Presidental contender for this reason. Foolish and ill-considered, yes, but my dislike of Hillary is, I’m sorry to say, quite intense.

November 16, 2007by Jeffrey Wells52 Comments
« Previous post
Hold Your Nose and Vote for Hillary
Next post »
Edwards joining the strikers