I mentioned a similarity factor between Rebel Without a Cause‘s James Dean and King of Kings‘ Jeffrey Hunter a few years ago and had forgotten about it, but this 7.8 Burmashave comment reminded me of it: “Anybody ever think about James Dean playing Jesus if he’d lived, and how fucking crazy that would have been?”

King of Kings and Rebel were directed by Nicholas Ray, of course, so in a sartorial fashion Ray did sorta kinda cast Dean in his Bible movie. He did this by having Hunter wear a facismile of the iconic red jacket and white T-shirt get-up that Dean wore in Rebel. Variety critic Todd McCarthy reminded me this morning , in fact, that note that “Ray dressed Hunter in a robe of exactly the same shade of red as Dean’s Rebel jacket.”

The idea of Christ wearing a red robe had already been established in The Robe and Demetrius and the Gladiators, but think for a moment about the ludicrousness of a dirt-poor Jesus of Nazareth wearing a red cloak with a perfect white T-shirt garment underneath. It’s as if they had Gap and Banana Republic shops in old Jerusalem, and Jesus and his disciples occasionally shopped there. 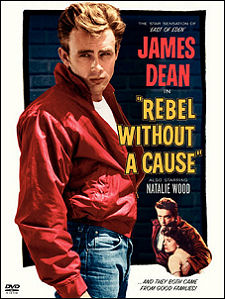 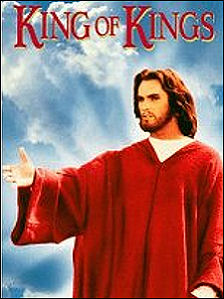 What if J.C. had hired a fashion consultant? “As you know, Nazarene, plain red works fine on every occasion, but — stop me if I’m overstepping — you need to present an extra stylistic distinction, something that says ‘this guy is special’ and not just some, whatever, shepherd or olive farmer or whatever, if you follow my drift. That’s why a white undergarment is such a good idea. And it comes with white briefs in case, perish the thought, you’re ever crucified, because the Roman guards will let you keep the briefs on. Or at least, they have with my other customers.”

“Everything you say about King of Kings is right,” Todd McCarthy wrote about my 7.8 posting, “but to me the most compelling aspect of the film it how political it is. The first whole section of the picture details the political situation in Judea at the time with almost documentary-like attention, and the script’s great and provocative gesture is to present Jesus and Harry Guardino‘s Barabbas as parallel revolutionaries — Jesus of a religious stripe and Barabbas as a political outlaw, which makes the ending ironic.

“In defining the major Jesus films of the ’60s-70s period, it’s fair to say that Stevens’ The Greatest Story Ever Told is the Protestant version, Zeffirelli’s Jesus of Nazareth is the Catholic version, Pasolini’s The Gospel According to St. Matthew is the Marxist version and King of Kings is the Zionist version.

“Of course Hunter is physically far too fair (and note the shaved armpits at the crucifixion), but he still manages to achieve a poignant purity as things move along. The score is one of Rozsa’s very greatest and crucial to covering over various narrative lurches and shortcomings. And, by the way, there are no known 70mm prints, so you can’t blame the Cinematheque for not delivering one.”” 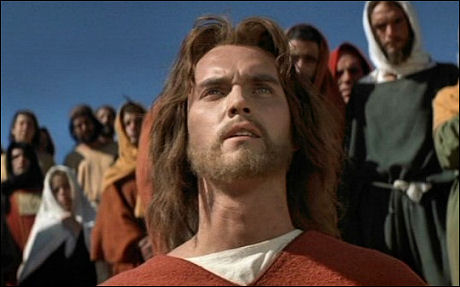