Except for one incorrect observation, Anthony Kaufman‘s 4.26 Indiewire piece about the response to Alex Gibney‘s Eliot Spitzer doc, which screened at Chelsea’s SVA theatre early Saturday evening, is righteously reported. The wrongo is Kaufman’s statement that “the film was one of a number of titles drawing a crowd larger than its theater over the weekend in New York City.” In fact, the screening was noteworthy for several seats in the rear section being unfilled. 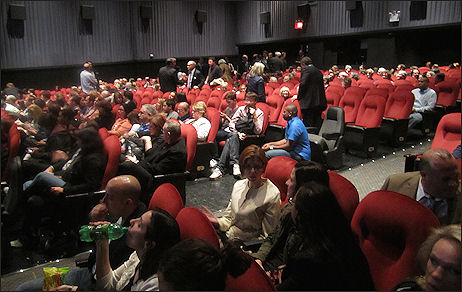 The above photo was taken by yours truly a few minutes after the film was supposed to begin at 6 pm. Unless 45 or 50 people slipped into the theatre after the film began, sat in the empty seats shown in the above photo and then slipped out before the film ended, the crowd was far from overflow — it wasn’t even at capacity.

A day before the screening I was told by 42West rep that my seeing the Gibney-Spitzer doc wasn’t necessarily assured, although they’d do everything they could. A few minutes before the film began they told me they had no ticket to pass along. So I went up to Gibney, who was standing near the entrance, and asked what the deal was (“Why have a public festival showing if you’re going to keep press guys like myself from seeing it?”). I was then told by 42West to hang tight, and about ten minutes later they handed me a ducat. I was obviously thankful and told them so, but some kind of seating shenanigans were going on. The above photo shows, of course, that finding open seats wasn’t an issue.

I didn’t mention in my initial review, by the way, that Gibney’s doc reveals a surprise about Ashley Alexandra Dupre, the escort girl who was heavily publicized for having been Spitzer’s primary pleasurer. Well, the doc says Ashley did him exactly once — that’s right, once — but that another lady of the night, called “Angelina,” did Spitzer repeatedly, and that she was also heavily questioned by F.B.I. agents during their investigation of Spitzer’s hotel-room sessions.

I’ve been so blanketed by idea and image of Ashley Dupre and only Ashley Dupre having been Spitzer’s girl than the news about Angelina bounced off my head like a tennis ball. Physiologically I heard it but for strange emotional and psychological comfort reasons I rejected the information. But I now accept it.