I’m sitting in the lobby of the Standard Hotel on the Lower West Side, and about to leave for the start of a two-week Mike Nichols retrospective at the Museum of Modern Art. (And, just for fun, a screening of Carnal Knowledge.) I haven’t time to write anything fresh, so I’ll just quote from my 12.17.07 response to Glenn Kenny‘s profile of Nichols that ran on 12.16 in L.A. Times . 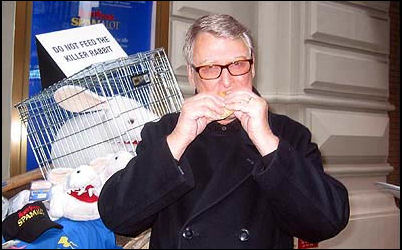 Kenny wrote that “one shouldn’t underestimate the Nichols touch” in having made Charlie Wilson’s War into a potentially popular ‘sand’ movie, despite Americans having said /no way’ to every ’07 film with the slightest whiff of any Middle Eastern elements.” Kenny was right, as it turned out — Charlie Wilson’s War went on to become a moderate hit, earning about $66 million domestically.

But “nobody has a ‘touch’ to have and to hold,” I wrote. “Artists are touched by inspiration like lightning — it passes through them, and they are nothing more than lucky conduits when this happens.

“The exceptional, long-lasting artists, of course, are those with a knack for keeping themselves open to inspiration, or who at least know how to position or trick themselves into the right state of mind so that lightning comes their way more often than not. And the fact is that Nichols-the-director went through two creative lightning phases in his life — the first from 1966 to ’75, the second from ’83 to the present. And there’s no question that the Phase One, so to speak, was the more searing and profound of the two.

The creative lightning of Phase One half-began with Nichols’ direction of Who’s Afraid of Virginia Wolff but it really kicked in with the enormous success of The Graduate (’67) — easily his finest film — and continued with the mixed successes of Catch 22 (’70), Carnal Knowledge (’71) and The Day of the Dolphin (’73). The end of Phase One was apparently caused or at least triggered by the crash-and-burn reception to The Fortune in 1975. Nichols disappeared for seven years after that. 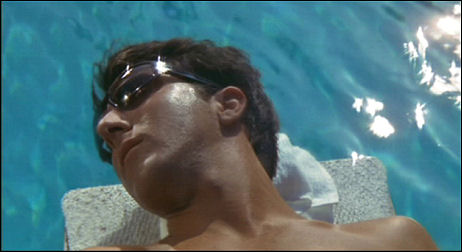 “NIchols got a more subdued version of the ‘lightning’ back in his Phase Two career with Silkwood, Biloxi Blues, Heartburn, The Birdcage, Wolf , Regarding Henry, Postcards from the Edge, Working Girl, Primary Colors, Closer, Angels Over America and Charlie Wilson’s War.

“Kenny mentioned a profile piece by the New Yorker’s John Lahr in which Nichols ‘described the waning inspiration that struck him in the years after his steep ascent’ and that ‘he also reveals that in the ’80s he struggled with a Halcion dependency that induced a breakdown.’

“But Kenny doesn’t acknowledge the extreme unusualness of Nichols’ career in that his Phase One brushstrokes — his signature style as a filmmaker from The Graduate to The Fortune — had totally disappeared when he returned to filmmaking in ’83 with Silkwood. He had literally abandoned his muse of the ’60s and early ’70s and become an entirely different (one could say less distinctive and more accomodating) film artist.

“The late Richard Sylbert, the fabled production designer who worked for Nichols on Who’s Afraid of Virginia Wolff, The Graduate, Carnal Knowledge, The Day of the Dolphin and The Fortune and obviously saw it all first-hand, explained this directorial-personality-change arc a few years ago over a lunch at Swingers.”