Tens of thousands of L.A. Times “Calendar” readers were informed yesterday in the “Guide” section (page E20) that Mike Binder‘ s Reign Over Me will open on Friday, March 9th. Informed not just by the film’s inclusion in the list of bullet graphs identifying the title, makers and synopses of the films opening five days from now, but also with a big, can’t-miss-it photo of Reign costars Don Cheadle and Adam Sandler . 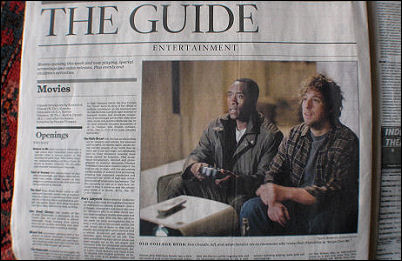 The unfortunate fact, however, is that Reign won’t be opening until March 23rd. Sony had it down as a 3.9 release about a month and a half ago, but then changed it to 3.23. The Calendar “Guide” listings are compiled by staffer Frank Torrez, who didn’t return two calls. That implies a wrongo on his part and not Sony’s. No biggie, mistakes happen. But if I were Torrez I’d have come in late, taken a very long lunch and caught up on my reading in a toilet stall for the rest of the afternoon.