As most HE readers know, I got “Scarlet Letter”-ed last March when Critics Choice honchos Joey Berlin and John DeSimio booted me out of their organization after being pressured by hysterical wokesters after I posted a sentence written by someone other than myself — a statement which sat on HE for an hour or less before I took it down.

The sentence alluded to the Atlanta massage parlor killings (the victims of which were Asian woman, although Robert Aaron Long‘s motivation wasn’t racial as much as an “intersection of gender-based violence, misogyny and xenophobia,” according to state Rep. Bee Nguyen) and how this tragedy might have affected Oscar voter sentiments.

The sentence read as follows: “If there was one millionth of a chance in hell that Chloé Zhao and Nomadland weren’t going to win Oscars, the Atlanta massage parlor killings just snuffed out that chance.” Not my thought and or a view I believed in or cared about, but for one fleeting moment I thought “wow, that’s a hot-button statement that readers might want to kick around.” Throw him to the wolves!

Certain publicists who didn’t like me to begin with for my bluntly worded opinions seized upon the CCA eviction as an excuse to take me off their screening invite lists, etc. Six weeks ago I wrote Joey Berlin and John DeSimio a letter about this incident and gave them what-for.

Not long after the article appeared HE regular Bobby Peru posted the following: 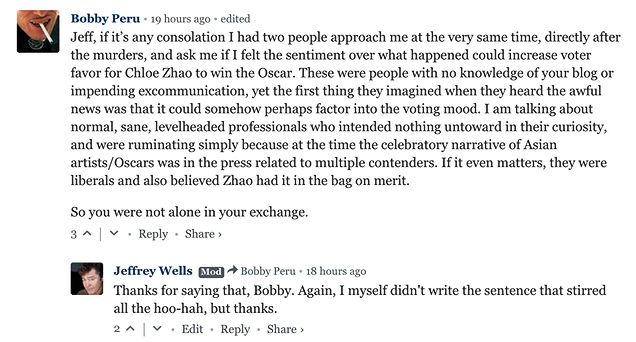 I’ve pointed this out before, but three similar incidents (tragic news affecting Oscar fortunes) happened within the last eight years.

1. In Boris Kachka’s 2.25.14 Vulture piece about Oscar bloggers (in which I was prominently covered), THR‘s Scott Feinberg was referenced doing the same thing.

Kachka: “Every controversy is quickly spun into the 24-hour Oscar cycle. A few short hours after Dylan Farrow renewed her molestation charges [against Woody Allen], there was Scott Feinberg, The Hollywood Reporter’s tireless columnist (and this year’s most accurate predictor so far) authoring a piece titled “Dylan Farrow’s Op-Ed Targets Woody Allen, But Could Hurt Cate Blanchett More (Analysis).”

2. Right after the Ferguson Grand Jury report came out on 11.25.14, I tweeted that a possible “strike a match rather than curse the darkness” response to this otherwise tragic event might be a surge of industry Best Picture support for Selma. Yup — another instance of the wrong HE tweet at the wrong time. But all I said was that symbolically lighting a candle rather than lamenting the ugliness might be a good thing in the end. 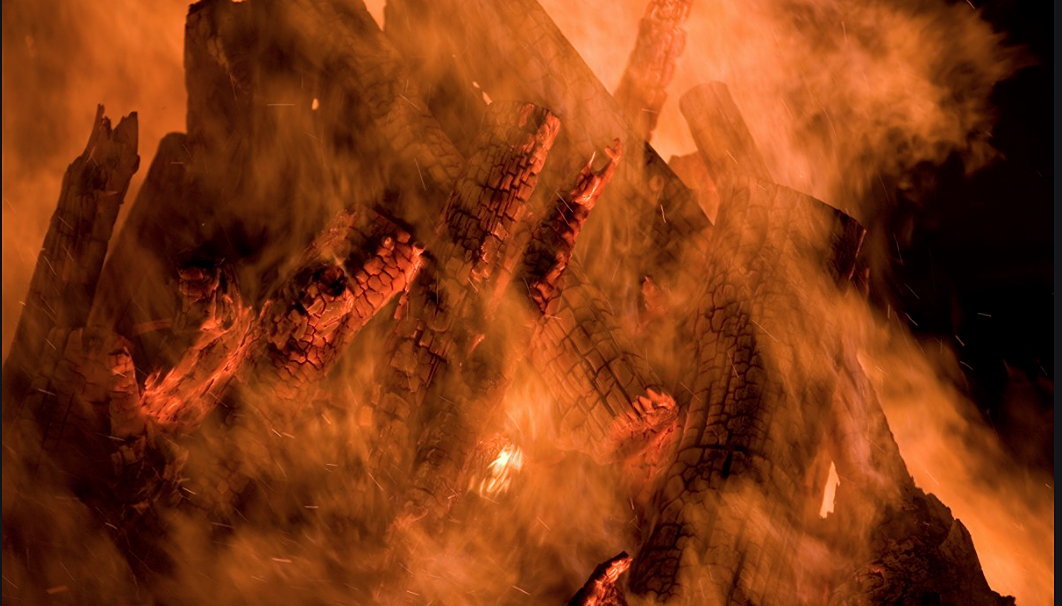 3. A couple of days later Selma director director Ava DuVernay pointed out a direct connection between her film and what had happened in Ferguson.

Feinberg, Kachka, DuVernay, Kohn…they saw a real-life tragedy in the real-news world, detected an Oscar-reflecting narrative and jumped right into it. And nobody said boo. I posted a real-lfe-tragedy-meets-Oscar-odds comment that someone else had written (and which I posted it for a mere hour), and I was sent to the guillotine. If there was a God, others would be facing a similar trauma right now.

September 19, 2021by Jeffrey Wells30 Comments
« Previous post
To Some, Good Looks Are Almost A Bad Thing
Next post »
Chastain Is Well Positioned