It was reported some time back that a Nicholas Ray double-bill — We Can’t Go Home Again, his last film, plus a doc about his life and career by Susan Ray, the late director’s widow, called Don’t Expect Too Much — will screen at the the Venice Film Festival on 9.4. The program will also screen at the N.Y. Film Festival, I learned earlier today. 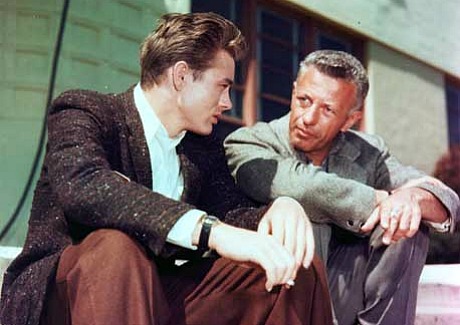 (l.) James Dean, (r.) Nicholas Ray during the making of Rebel Without A Cause in early 1955, when Ray was 44 or thereabouts.

If you want to be in good standing with the international elite film snob community, you have to be down with Ray’s films, just like you have to swear by the coded soap-opera kitsch of Douglas Sirk. This is a non-debatable clause in the contract. This is mainly because Ray was a highly skilled and passionate filmmaker, but primarily because Jean-Luc Godard once wrote that “Ray is cinema!,” or words to that effect.

My favorite Ray films have always been Rebel Without A Cause, In A Lonely Place, On Dangerous Ground and They Live By Night. Yes, I know — a boring thing to say. I’m sorry to offend the high priests of the temple but I hated Bigger Than Life when I saw it at the Film Forum a couple of years ago, and I’ve always been “meh” on Johnny Guitar.

Ever notice how the snobs never include Ray’s 55 Days at Peking or King of Kings in their retrospectives? Or mention them in their articles? That’s because they’re regarded as somewhat embarassing paycheck gigs and not “genuine” Ray films. But I kinda like 55 Days at Peking. Ray reportedly collapsed during shooting fo that Charlton Heston war-siege drama; the offshoot was that he had trouble finding work for a long time after.

My favorite Ray moment of the ’70s? When he kicks that paint can across the loft floor in The American Friend.

Favorite Ray anecdote: His walking in on wife Gloria Grahame while she was in bed with his 13 year-old son, Tony. 2nd favorite: his allegedly having had affairs with the 16 year-old Natalie Wood as well as James Dean while making Rebel. 3rd favorite: the story about Ray being bombed at Barney’s Beanery and without money and stuck for a ride home, allegedly sometime in the ’60s.