I’ll talk about alleged or supposed private stuff between acquaintances or filmmakers or whomever until the cows come home, but I never write about it. And so yes, I agree that it’s little bit icky to get into this but I did coin the power-couple term “Biggy-Boal” so I feel I have to riff on this somehow. The fact is that Buzzfeed‘s Kate Aurthur has reported today that a certain aspect of the partnership known as Biggy-Boal is no more. 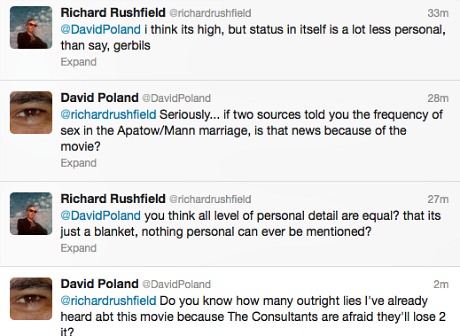 In her words: “Sources who know Bigelow and Boal are saying they are no longer together and are trying to keep that quiet as they promote [Zero Dark Thirty].”

“At best, their togetherness is a manifestation of a productive working team,” Aurthur writes. “At worst, Bigelow, a woman, needs Boal, a male investigative journalist, to add legitimacy to her hard-hitting films. Perhaps it’s both.” Wells: Of course it’s both!

“In a two-day-old New York piece about their partnership, Mark Harris “asked the two of them about whether they planned to collaborate again and noted, ‘Across the table, they exchange, not for the first time, a let’s-coordinate-our-answers glance.’ And then Boal said, ‘I think we both want to…it’s up to the movie gods.”

“‘For his part, Boal seems to be moving on — on Monday, he announced he’s forming his own company, Page One Productions, to adapt reporters’ stories into films. Bigelow is not involved.”

Another except from the Harris article:

“Bigelow’s partnership with Boal, who met her about ten years ago when she inquired about a story he’d written for Playboy, has taken her into new and rewarding territory, his journalistic cred a complement to her unsentimental, realist aesthetic. Their collaboration — she calls herself ‘a delivery system for Mark’s content‘ — is so intense that many assume it is, or was, romantic, something the two have never acknowledged, denied, or discussed. In conversation, that intensity is something to behold.”