Damon and Stillwater director Tom McCarthy “road-tripped through Oklahoma prior to shooting, where they were invited into the break rooms and backyard barbecues of the real men who inspired the character.

“These guys don’t apologize for who they are,” Damon said. “They’re in the oil business, of course he [would have] voted for Trump. [But] these people were wonderful to us, they really helped us. It was eye-opening for me.”

“They all have goatees, the sunglasses. They’re not six-pack ab guys, but they’re strong. You go to their barbecues and a guitar comes out and they start singing church songs.”

HE comment: Damon is portraying these Oklahoma fellows in fairly benign terms — authentic, earnest, no apologies for who and what they are. His generous impressions are more or less based on these guys being “wonderful” in helping Damon and McCarthy learn what they’re really about.

But what middle-American Average Joe wouldn’t be generously forthcoming if a famous actor wanted to know what made he and his friends tick? Supporting Donald Trump is not some idle preference. Anyone failing (or refusing) to understand that Trump is a malicious, anti-Democratic sociopath and criminal con man is living in a rabbit hole of denial, and is therefore not, by any fair or sensible standard, a fundamentally decent person. They are basically admitting to being delusional cult followers. 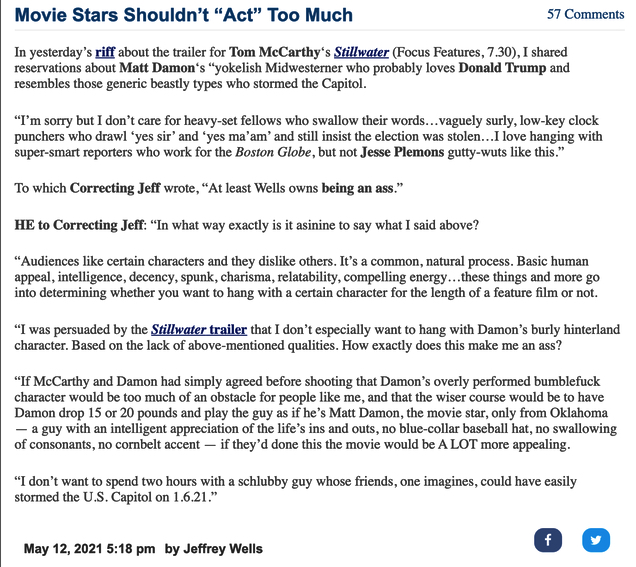 July 9, 2021by Jeffrey Wells30 Comments
« Previous post
True Headcap Story
Next post »
HE to Chelsea Handler: What’s Funny, If Anything?