Variety‘s Diane Garrett has answered a question I put forward on 2.17 about the prospects of a restored African Queen DVD. The answer is, don’t hold your breath. The video rights are now held by Paramount Home Video (Fox Home Video having allowed its license to lapse) and the film is “awaiting restoration” — i.e., no funding has been approved/finalized to pay for a restoration of this 1951 classic John Huston film — “and has no set release date” — i.e., no restoration in sight, no release plans. 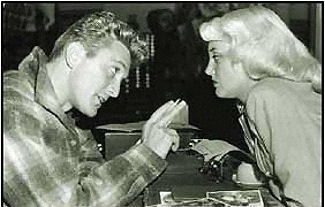 Garrett also reveals that the Criterion Collection is “devoting exacting care to [releasing] Billy Wilder‘s Ace in the Hole — good news! (Keep in mind that a restored print of Ace in the Hole was shown at Manhattan’s Film Forum from 1.12.07 through 1.18.07.) Criterion president Peter Becker acknowledges that “it often takes years to prepare special editions,” and says “we realize we are, in effect, suppressing these films while we are waiting to give them special edition treatment,.”

Warner Home Video’s George Feltenstein also reveals that “only right now are we able to release The Magnificent Ambersons,” Orson Welles‘ studio-mangled 1942 classic, which “will come out on disc next year.” (Not a big deal in my book — the Holy Amberson’s Grail is to find the footage that RKO and editor Robert Wise chopped out and reconstruct Welles’ original cut.)

Richard Armstrong‘s “Sense of Cinema” appreciation of Ace in the Hole is worth reading. The last graph is especially interesting:

“While Ace in the Hole won an award at the Venice Film Festival, it flopped so badly at the American box office that a chastened Wilder went on to mainly adapt hit Broadway plays until 1960.” In other words, the reception to Ace in the Hole is the reason Wilder did director-for-hire movies like The Seven Year Itch, The Spirit of St. Louis, Love in the Afternoon and Witness for the Prosecution all through the mid to late ’50s. 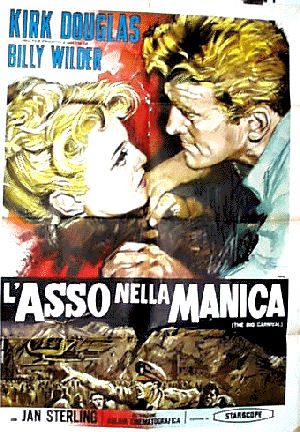 “Most Americans either hated the film or stayed away,” Armstrong continues. “Reviewers savaged it in turn. In 1997, the film was remade as Mad City (Costa- Gavras). If the title Mad City carries a hint that this city is exceptional, it also reminds us that Ace in the Hole‘s title was changed to The Big Carnival, according to the industry convention that ‘Big’ suggested exceptionally immoral doings.

“Oddly, the studios are still dependent upon yet scared of an unpredictable crowd. And with good reason, perhaps. As Wilder once said, people are people, after all. Fifty years on, some still pause at highway pile-ups.”

I’m also thinking back to that great Kirk Douglas speech in Ace in the Hole in which he speaks of his love for the rich culture and character of New York City compared to the primeval benefits of living in a hick town with its access to nature’s splendor, and Douglas saying that “the four spindly trees outside of Rockefeller Center” are all the nature that he needs in that department. 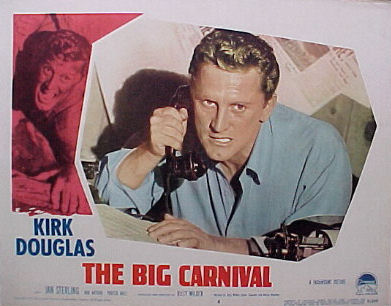