Zack Snyder‘s Battle of Thermopylae epic 300 is being read by certain brainy journo types as a modern-day political metaphor, according to this tongue-in-cheek Michael Cieply piece in the N.Y. Times. 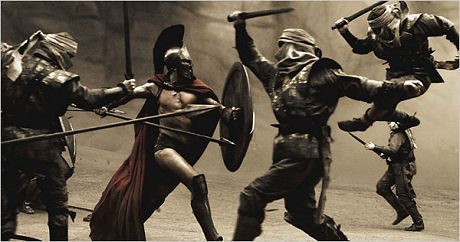 I won’t be catching it until tomorrow night’s IMAX screening at The Bridge, but somehow a question reportedly asked of Snyder by a press-junket smarty-pants — “Is George Bush Leonidas or Xerxes?” — seems beside the point, given the heavily visual graphic-novel origins (i.e., shorthand for a primitive-mythical storyline geared to 15 year-olds) plus the repeated observation about the film’s homoerotic, gay-porn tone with all the buffed bods straight out of Gold’s Gym in Venice.

The funniest thing in the Cieply story is the 300 still [above] used by Times editors. A scene from the movie? It looks like a bunch of plastic action figures sitting on a table top in some photographer’s studio. Who are those guys with the tunics and the wrap-around, head-covering turbans….flying ninja Persians? (The Zodiac killer wore an outfit just like these when he knifed the couple by the lake.) The shot isn’t complete without a large thumb and forefinger of a nine year-old placing one of the action figures on the table.

If 300‘s mise en scene is in any way indicated by this shot, it’s going to be a joke.