I chatted last night with legendary director Whit Stillman, who’s been living in Manhattan and writing screenplays for the last several months after an extended expat period in Barcelona and Paris. The occasion was a screening at the 92YTribeca of Metropolitan (1990), which will have a 20th anniversary showing at next month’s Sundance Film Festival. Sometime during the first weekend, I was told, with a social gathering to follow. Calling all Stillman heads!

Stillman and Metropolitan star Chris Eigeman did a q&a after the screening, and then everyone hit the bar and drank beer.

My favorite Stillman film is Barcelona by far, but Metropolitan (which came out on a Criterion DVD in ’06) is still dryly amusing and faintly bizarre in its weird and chuckly anthropological way. It’s a carefully ordered tale of some Bush-era rich kids that has some of the sharpest (and at times almost surreal) young-person dialogue ever written.

In a certain sense Metropolitan is arguably a more interesting film now than it was in 1989/90. Because it shows more than ever that Stillman is Wes Anderson‘s uncle. (Or older brother, older cousin or whatever.) Because they both make/have made films about brilliant, curiously charismatic people who breathe rarified air and live on their own clouds. Stillman is a little more in the UHBs (urban haute bourgeoisie) than Anderson, but it’s a similar line of country.

Stillman and Anderson are also somewhat similar in the sense that they shoot with an exacting visual aesthetic. (Anderson a little more so). Plus they both dress nicely and have both lived in Paris (Stillman previously, Anderson currently) and probably share several other similarities. And yet they’ve never met, Stillman told me last night. Weird. (Hey, Wes? If you’re reading this get in touch and I’ll hook you guys up.) 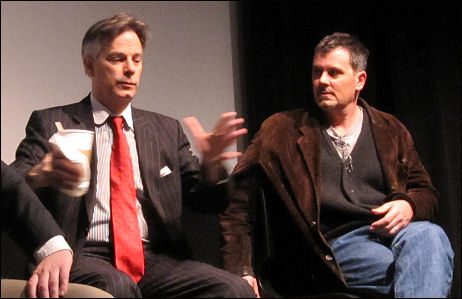 If you ask me Stillman laid the foundation, built the house and then moved to Europe, and then Anderson moved in and remodelled and made it his own. Anderson obviously has his own thematic signature that has manifested in many different ways, but I can’t help but think of Stillman’s three films (including The Last Days of Disco) when I think of Anderson’s. The linkage is unquestionable.

Anyway, it would be great to see Stillman get out of Director’s Jail and get back on the horse and start composing more films about witty rich oddballs who needs to find their souls. I would kill to see a Whit Stillman film about the Goldman Sachs culture — it’s a subject that has his name on it. Maybe if Anderson really and truly doesn’t feel that he wants to direct The Rosenthaler Suite (which I think he should), producer Brian Grazer could discuss it with Stillman, who’s one of the few directors who understands the ironic quirk character of uptown Manhattan realms.