“In his victory speech after the smashing North Carolina results came in, Barack Obama went directly after both John McCain and the media. ‘[McCain’s] plan to win in November appears to come from the very same playbook that his side has used time after time in election after election,’ Obama said. ‘Yes, we know what’s coming. I’m not naive. We’ve already seen it, the same names and labels they always pin on everyone who doesn’t agree with all their ideas, the same efforts to distract us from the issues that affect our lives, by pouncing on every gaffe and association and fake controversy, in the hopes that the media will play along.’ 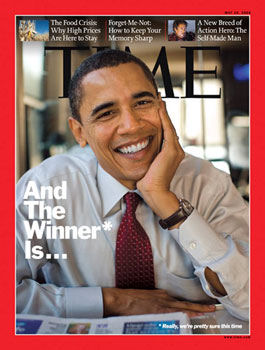 “In the end, Obama’s challenge to the media is as significant as his challenge to McCain. All the evidence — and especially the selection of these two apparent nominees — suggests the public not only is taking this election very seriously but is also extremely concerned about the state of the nation and tired of politics as usual. I suspect the public is also tired of media as usual, tired of journalists who put showmanship over substance…as I found myself doing in the days before the May 6 primaries.
“Obama was talking about the Republicans, but he could easily have been talking about the press when he said, ‘The question, then, is not what kind of campaign they will run; it’s what kind of campaign we will run. It’s what we will do to make this year different. You see, I didn’t get into this race thinking that I could avoid this kind of politics, but I am running for President because this is the time to end it.'” — from “Obama’s Game Change,” a 5.8 essay by Time‘s Joe Klein.