MGM production chief Mary Parent has “assembled [a] production team” to make a “new installment” — i.e., not a remake — of John Milius‘s Red Dawn, it was officially announced today in an e-mailed MGM press release. Horror writer Carl Ellsworth will pen a script based on a story by Jeremy Passmore. A.D. and stunt man Dan Bradley has been signed to direct. (A stunt guy?) The producers will be Contrafilm’s Tripp Vinson and Beau Flynn. 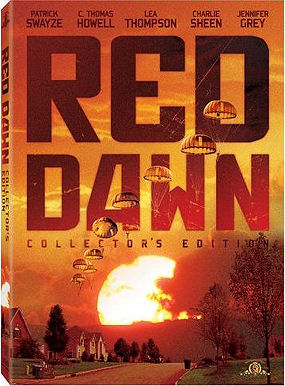 In other words, Parent is looking to push out a B-level popcorn actioner.
The 1984 original was about teenagers defending their homeland from invading Russian troops.The press release makes no mention of which country the invading army might be from this time, but since Red Dawn was a ground-level political fantasy and Islamic fundamentalists are the only decent villains around these days, it’s probably safe to assume Ellsworth and Passmore’s story will be using Middle Eastern baddies of some sort.
If so, that would mean Parent’s new Red Dawn will be a John McCain wet dream movie aimed at attracting Barack Obama‘s “bitter” brigade — under-educated, red-state-residing, work-boot-wearing, gun-clinging, etc.
Another story option is that the invaders are space aliens, but of course that would invalidate Parent’s statement that the film will be a “new installment” of the Milius film.
In acknowledgement of last July’s double-disc DVD of Milius’s classic, I wrote the following on 7.26.07: “Ruthless, ogre-ish, heavily-armed invaders descend from the sky, take over the reins of government, and before you know it rebel groups are forming into grass-roots militias, fighting back like proud guerillas and asserting their nativist rights — this is our country! Death to the invaders! Death before submission!
“Does this like, uhm…remind anyone of anything?
“This double-disc DVD of John Milius’ Red Dawn hit stores on 7.17. Do you think the MGM/UA Home Video guys had any ideas about present-day parallels, or were they just after some 20th anniversary bucks? I once asked Milius himself about the Iraqi rebellion angle — he didn’t bite, but he didn’t strenuously argue it either.”
Nobody does myopia like Americans. I’m including American filmmakers in this equation.