“Not to get too maudlin and dramatic about it, but last night I felt like I was witnessing the death of Hollywood before my very eyes,” Rushfield writes.

Excerpt: “Hollywood’s awards circuit has always been interesting in that it shows the face that the industry wants to present the world. Glamorous! Caring! Creators of myths and spectacle! Good looking! Conscience of the world! You name it, as Hollywood’s vision of itself has evolved.

“Last night, at a moment in which the world is truly in enormous pain, the face of Hollywood was selfish, self-obsessed, small, petty and incompetent; thinking about itself, thinking about its causes, thinking about anything but what the audience might be looking for from its entertainers at this moment.” 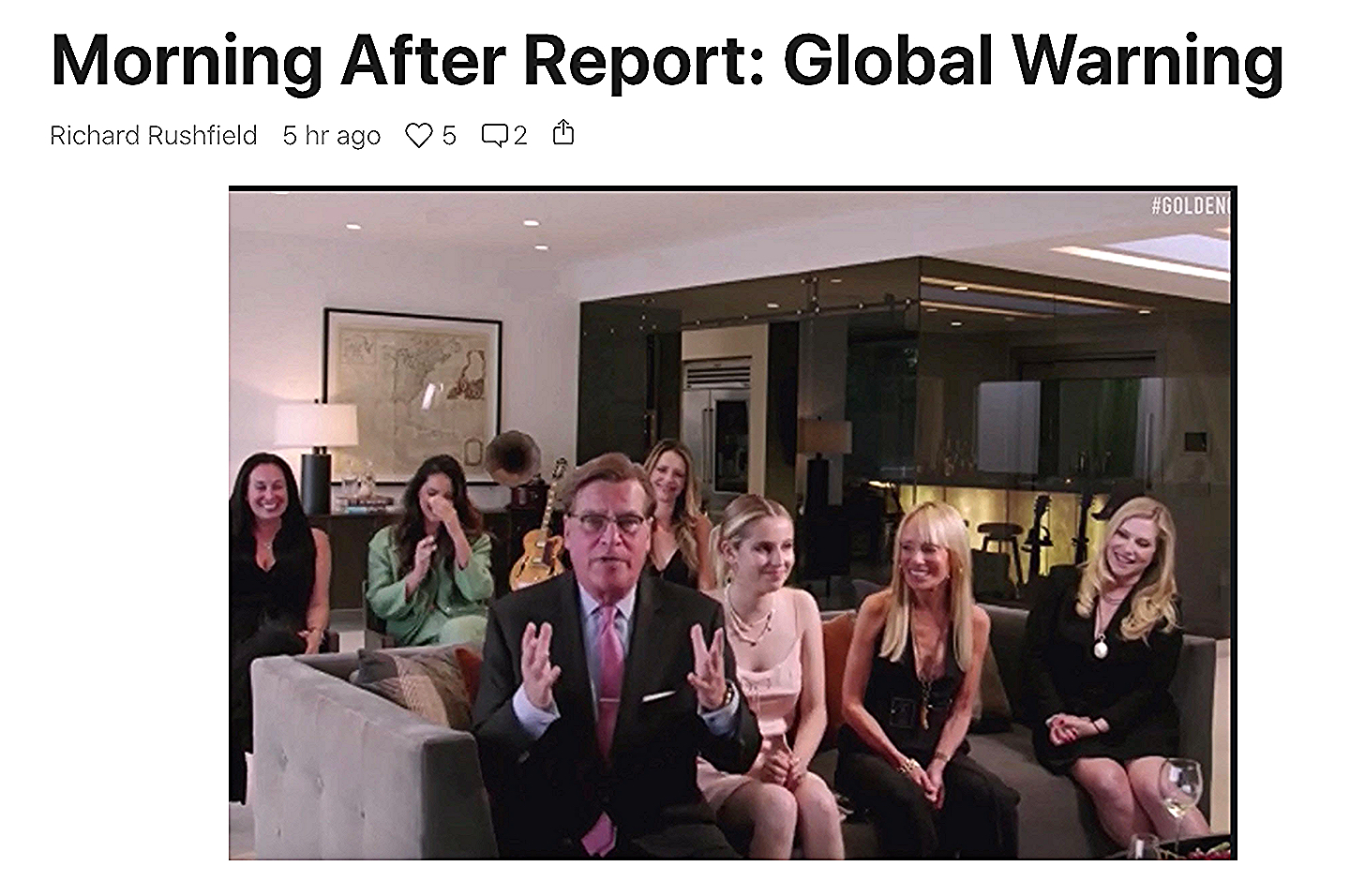 HE to Rushfield: As you know, progressive Hollywood is riding a wave of woke evangelical fervor. Artists of color, LGBTQs, the #MeToo community and various supporters throughout the Twitterverse have grabbed the reins and are leading the San Juan Hill charge, and the goal they’re pursuing — the hill they’re looking to conquer and plant their flag upon — is nothing less than the transforming of American society into a better, more open-hearted, less Republican, more compassionate and forward-looking place.

Well, not American society as a whole but the upscale, moderate-minded urban blues — those who are theoretically capable of modifying their thinking and social behavior.

In a certain sense it’s a myopic realm that progressive Hollywood is operating out of, and at the same time they’re reaching out and looking to touch people where they live. “Entertaining” Average Joes is what a good portion of the streaming and theatrical industry is still trying to do. But this, by and large, is not what the award-season community is focused upon.

Friendo: “I don’t know if you’ve seen Richard Rushfield’s Ankler column this morning, in which he basically calls last night’s Golden Globes the Worst Thing Ever, the Death of Hollywood, and other crimes against humanity.

“I watched the Globes and thought they were fine. They were the COVID-era Globes — no more, no less. That’s why they were what they were. Should they have been cancelled (as Rushfield apparently seems to think)? No. That would have been dumb. Better a compromised show and a compromised Oscars, than giving up the ghost.

“And I thought it was interesting — actually rather humane — to see a bunch of glamorous showbiz folks try to put on a glitzy awards ceremony on Zoom.

“Why was this a disaster? It’s Covidthat’s the disaster, for Chrissake.

“Rushfeld is having his cake and eating it too. ‘The Globes don’t matter! No one takes them seriously!” So is it okay if they go on? No! It’s a fatal compromise! It’s the end! Of everything!’

“The subtext of his columns is that he wants all this stuff to die. He’d deny it, but it’s there.”