Toy in the Attic

Yesterday a much-anticipated retort from Robert Weide, the documentarian and Curb Your Enthusiasm producer who’s been steadfastly defending Woody Allen in the years-long battle with the Farrows (Dylan, Mia, Ronan) over that allegation of child molestation on 8.4.92, appeared.

It deals with the alleged moving electric train set that Dylan described in some detail in a 2.1.14 N.Y. Times article, written by Nicholas Kristof.

Weide’s rebuttal surfaced concurrent with the airing of episode #2 of Kirby Dick and Amy Zeiring‘s Allen v. Farrow, a four-part series about same. On 2.22 or exactly a week ago, Weide accused Dick and Zeiring of either being “half-assed researchers” or “inherently manipulative and dishonest.” He pledged on Twitter that he would explain in due time.

The gist of Weide’s 2.28 argument, directly drawn from testimony from pro-Farrow nanny Kristi Groteke, who was working at Frog Hollow on the day of the alleged assault, is this: There was no electric train, moving or stationery, in the attic that day, but there was a non-electric plastic train toy — something for a two-year-old to push around and play with.

Does this constitute a ‘holy shit!” Perry Mason moment? No, but it does warrant a certain puzzlement. 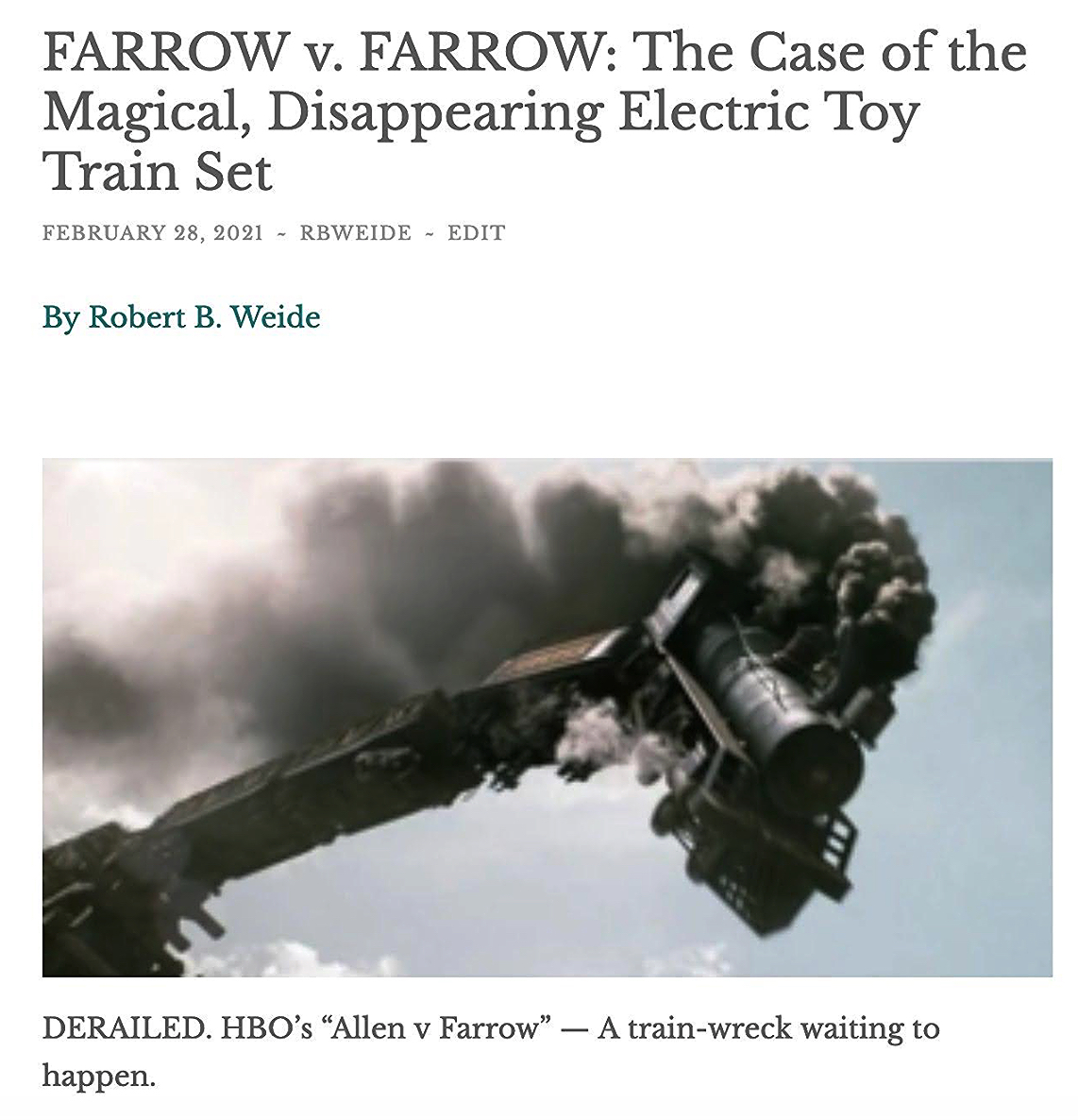 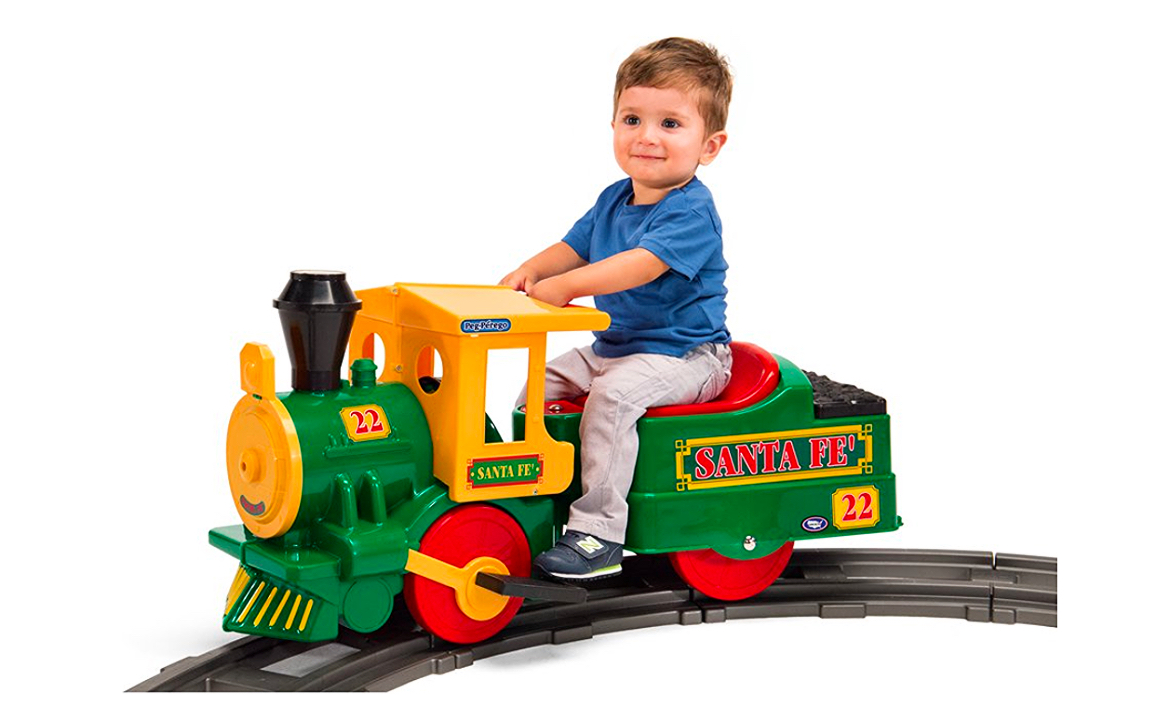 Weide: “Dylan specifically recalls the train set ‘travel[ing] around the attic.’ Then why does the police diagram show the track having a circumference of only 4 feet at its widest? Maybe Dylan didn’t literally mean ‘around’ the attic, but around in a circle, in the attic? Maybe we should give her the benefit of the doubt here. But the question remains: was there such a functioning train set in that space? Moses says there wasn’t even an electrical outlet in the crawl space. So was the electric train battery-operated? Is there anyone who can untangle this conundrum at the center of Dylan’s accusation?

“Kristi Groteke, a nanny in the Farrow household who was on duty that day, testified in the 1993 custody trial, Allen v. Farrow, from which the HBO series takes its title. Groteke appeared as a friendly witness for her employer, Mia Farrow, and was asked about the content of the attic during direct examination by Mia’s attorney, Eleanor Alter. This means Groteke’s answer would have been known by Mia’s defense team prior to questioning her on the stand. (This is the recollection of a 23-year-old woman, less than a year after the alleged event, versus a woman recounting her memories as a 7-year-old, 23 years after the fact.)

“When asked about the content of the crawl space, Groteke recalls [as follows]: ‘There are some pictures and there is a trunk where things are stored, and there is a train set which the children take out and play with sometimes.’ When asked to describe the set, Groteke replies, “They are big, heavy plastic, green tracks and they fit into each other like puzzle pieces, and the train is a train car that is made for a child to sit on and ride.’ Alter asks, “Have you ever seen the train set in any of the rooms?” Groteke: “Yes. I have seen it downstairs in the living room, but more recently in the past year in Mia’s room and in the children’s room, through the hallways.” Alter: “’So they take it out of the crawl space?’ Groteke: ‘Yes.'”

HE comment: In short, for whatever reason Dylan apparently invented the recollection about a toy train moving around the attic or travelling along an oblong-shaped train track. You can put this down to the occasional vagueness of memory. I would put it down to unnecessary invention, which makes the water seem a bit murky.

A discussion of the merits happened this morning between myself, Friendo #1 and Friendo #2:

Friendo #1: “This doesn’t feel like the smoking gun Weide promised. I had thought, reading his implication, that we were going to discover the police drawing was some sort of fake. He raises an interesting issue, in terms of the nature of the train set. It wasn’t some electric train spinning around; it was larger and plastic — a notable discrepancy. But if anything, his post does serve to confirm that there was some sort of train set in the attic.

“Beyond that, I was shocked that Weide said he wasn’t going to watch the entire series. Talk about running from actual evidence! It might seem arduous to him, but why wouldn’t he watch it? This is clearly a major event in the Woody/Mia/Dylan v. Woody saga. Surely there are nuances there in what’s presented that he’d want to soak up, if only to refute them. I find his refusal to watch the series…telling.”

HE: “Agreed — Weide needs to man up and sit down and watch the whole series and take notes, etc. Dylan said and wrote that the electric train was moving around the room. Let’s cut her a little slack and allow that the train she saw wasn’t moving around the room but in an oval circle, around and around. The key thing here is that the plastic train set in question WASN’T BUILT TO MOVE WITHOUT BEING PUSHED. In other words, the train just sat there, immobile. Because it was built that way. Why, then, would the adult Dylan describe it in 2014 as moving around on its own electric power? She could have easily said that the mere sight of a toy train ushers in disturbing associations. But she didn’t. We all have our vague memories, but this is nonetheless an odd thing to get wrong.”

Friendo #1: “I can believe that (1) the abuse happened; (2) it happened in the attic; (3) there was a train set in the attic; (4) Dylan has a memory of that train set; and (5) but that her memory of a train ‘moving around in a circle’ was a false memory that got embellished with time, added on top of her real memory. The point is that one’s memory of a scene — in a movie or in life — is hardly foolproof. It’s amazing what the mind can invent, and then cling to. And kids? Forget abused kids. Just good old kids. They live in a world of the imagination.”

Friendo #2: “The train set thing means nothing to me because as we know memories are extremely flexible with details like that. Your imagination could have seen the train running when your eye didn’t, etc.”

HE: “Agreed but it’s still strange. If Dylan was looking to make a point about the train set burned into her memory as an associative trauma thing, she simply needed to mention the SIGHT of the train set. No sweat. Easy. Instead she embroidered the memory with imagined movement.”

Friendo #2: “I don’t know but to me it doesn’t mean it didn’t happen. It could mean she remembered the train set wrong.”

HE: “You both know that while no one is saying that Dylan is lying (according to her own sense of truth), saying that the train was moving alludes to more than just a hazy memory. It alludes to unnecessary invention. At the very least it strangely muddies (muddles?) her side of the story.”

Friendo #1: “No side of the story here is perfect. But as I said before: Dylan’s memory, in this case, actually seems no more muddied than Moses Farrow‘s (he said there was never a train in the attic, which is less close to the truth than what Dylan said). And Dylan, being 7 at the time and an (alleged) sexual abuse victim, at least has an excuse for foggy memories. It feels, to me, like the subtext of Robert Weide’s refusal to watch the series is: He doesn’t want to confront the tapes of Dylan made when she was 7.”