“When I first meet Guillermo del Toro, writer/director of Pan’s Labyrinth, one of the true masterpieces of the decade, he is not promoting his own movie,” begins Sasha Stone‘s just-up profile. “He is there, along with his friend Alejandro Gonzalez Inarritu to hold a special screening for their friend Alfonso Cuaron‘s new film, Children of Men.” 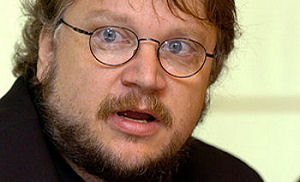 “Del Toro, Cuaron and Gonzalez Inarritu together have produced some of the year’s best offerings, even if Children of Men and Pan’s Labyrinth hit almost too late for Oscar voters or guild voters to catch up with them. Running the awards circuit can do wonders for films that were difficult to get made, namely in the money department. Being nominated for an Oscar at least doubles your profit out of the gate, which can mean life or death for a labor of love like Pan’s.
“While Babel is a strong best picture contender, and Pan’s the frontrunner for the foreign language Oscar, Children of Men is a highly acclaimed film yet so few Academy members, and perhaps guild members, seem to have seen it. It seemed odd to me that these two lauded directors would be doing anything but trying to gain recognition for their own work, but what you get immediately from them is that they aren’t like the typical Hollywood players.
“The Universal lot was not easy to get to on a Wednesday night. With all of the screenings and parties and voting, how can any Academy voter keep straight all that needs to be seen and done. This is why Del Toro and Gonzalez Inarritu went to the trouble of holding a special screening — in hopes of giving Academy members a chance to see it on the big screen, which greatly enhances the experience of Children of Men.
“Friendship, collaboration and relationships are important to them. The question isn’t why were they doing this for their friend but rather, how could they not do it?”