I had a nice, friendly, off-the-record lunch today with Hurt Locker director Kathryn Bigelow at Extra Virgin on West 4th. She’s in Manhattan for a day or two, and is sitting for a q & a with director-writer Tony Gilroy this evening at the DGA theatre on West 57th. On 11.30 Bigelow will be handed a tribute award at the 19th annual Gotham Independent Film Awards. The org has also nominated Hurt Locker for Best Feature, Best Ensemble Performance and Best Breakthrough Actor (i.e., Jeremy Renner). 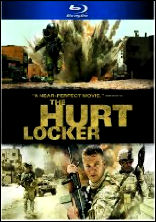 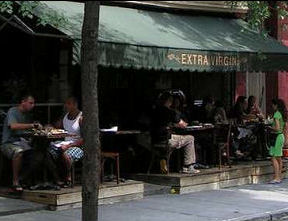 The DVD/Bluray comes out January 12th. If Summit is smart they’ll put the film back into NY and LA theatres starting next month.

Anyway after Bigelow left and I was putting my coat on I asked the Extra Virgin waitress if she’d seen The Hurt Locker. “The what?,” she said. “The Hurt Locker. An Iraq movie, bomb-squad defusing.” Her face was a blank. “Is it a documentary?,” she asked. “Nope, feature…a thriller,” I said. “Who’s in it?” she said. “Jeremy Renner, Ralph Fiennes, Anthony Mackie….that’s okay, just wondering,” I said.

Intrigued, I walked into the main room and asked the hostess and (I think) another lady employee who was sitting at the bar if they’d seen it. Same reaction — neither woman had even heard the title.

And we’re not talking about waitresses in some greasy spoon in Pensacola, Florida. New Yorkers are supposed to be moderately hip and aware. It’s one thing for these women not to have seen an Iraq War film, but to draw a total blank at a mention of the title? This obviously says nothing about the quality of the film, and almost everything about the lackluster marketing effort by Summit.