Assisted by editor David Tedeschi (Shine a Light, No Direction Home), Martin Scorsese will assemble a doc about the life of the late George Harrison, the quietest, most solemn-minded Beatle who played a mean crying guitar. His playing on “So Sad,” “While My Guitar Gently Weeps,” etc. (Is that Harrison playing on Badfinger‘s “Day After Day,” or someone who sounds like him?) He was also one of the most economical lead guitarists in rock music history. That mad jangly riff on “Hey, Bulldog” still has a great tumultuous quality. 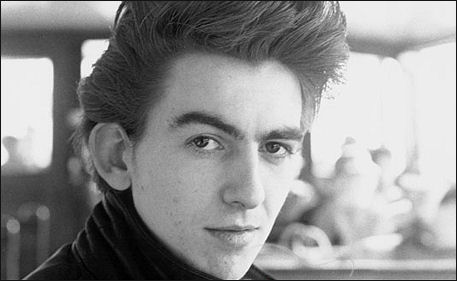 Scorsese and Tedeschi can cut and interview all they want, but Harrison’s greatest cinematic moment will always be that Hard Day’s Night scene with Kenneth Haigh as the trend-obsessed ad man. Harrison: “She’s a drag, a well-known drag. We used to turn the sound down on her and say rude things.” Haigh: “You can be replaced, chicky-baby.” Harrison: “I don’t care.”

Nobody’s just one color or mood or flavor. Everyone’s complicated and inconsistent and contradictory. If Harrison-the-holy wasn’t known for occasionally flawed or weird behavior his rep would be insufferable.

Variety‘s Michael Fleming reports that the doc “is being constructed as a theatrical release, and the Harrison family will supply materials from its extensive archive. Interviews and early production will begin later this year, and the film will take several years to complete.” Several years?