I was invited to last night’s Entertainment Weekly soiree to honor and welcome L.A. bureau chief Sean Smith (formerly of Newsweek), even though Smith’s been on the job for eight weeks. It was a truly elegant event — relaxing, soothing lighting, fragrant evening air, no blaring music. The best party I’ve been to in months — nicer than anything I attended during the Toronto Film Festival and that’s saying something. 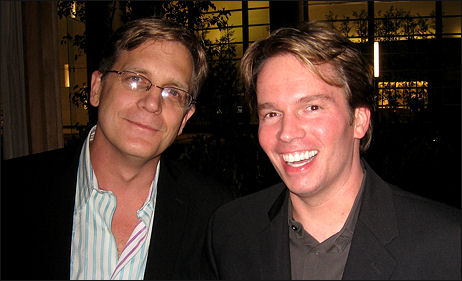 Smith and EW reporter Nicole Sperling talked about the just-launched online feature called Hollywood Insider that will be composed of nine or ten stories per day (just like HE!). Some of it will be trade stuff, said Sperling, and will cover movies, music, TV…the entire spread. Five staffers (Sperling, Shirley Halperin, Dave Karger, Joshua Rich and Lynette Rice) are expected to bang out three items per day.

The guests were all top-dog, cream-of-the-crop publicists. I may have been the only non-EW journalist in attendance. The party was held at Craft, an elegant Century City restaurant that sits under the shadow of “the building with the hole in it,” otherwise known as “the Death Star” because it’s where CAA is headquartered.

I was so fried and frazzled from my usual 12-hour work day and so underfed (no breakfast, lunch or dinner except for three or four tangerines, some coffee and two or three Diet Cokes) that I succumbed to the abundant Sauvignon Blanc and — brilliant! — got drunk. I verbally embarassed myself only once, I think. Live and learn.

I was noticing as I came up the escalator inside the “Death Star” building that the faces of the people on the down escalator and in the cavernous lobby had a certain old-world, blue-blood quality. Like the people you tend to see in the Harvard Club on west 44th Street. That’s CAA for you — they pick and choose very carefully and don’t let any mongrels into the club.