Scott Feinberg Is Listening To The Snooties

…and is therefore wrong, wrong and terribly wrong for having stated that Spider-Man: No Way Home is one of the six Best Picture “longer shots” (right behind the list of six “possibilities“) on his THR checklist.

In strictly numerical terms, Feinberg has Spider-Man: No Way Home in 19th place. Let me explain something right here and now — that movie is not in 19th place!! It’s in sixth or seventh place among ten. Maybe even in fifth! Because it’s the Sony savior movie…the jackpot movie…the film that has lifted all spirits and raised all boats. And Feinberg cannot shit on this film….he can’t!

To my way of thinking Feinberg’s spitball picks are directly a result of listening to too many elite snooties, and we know who and what I’m talking about.

At times I’m persuaded that snooties are sworn enemies of emotional fulfillment and satisfaction (and I’m including the kind of spiritual payoff movie that Paul Schrader‘s First Reformed was) and too many are supporters of status-quo kowtowing and path-of-least-resistance wokeness, and right now they’re all striding around with big Power of the Dog and Drive My Car buttons on their chest. 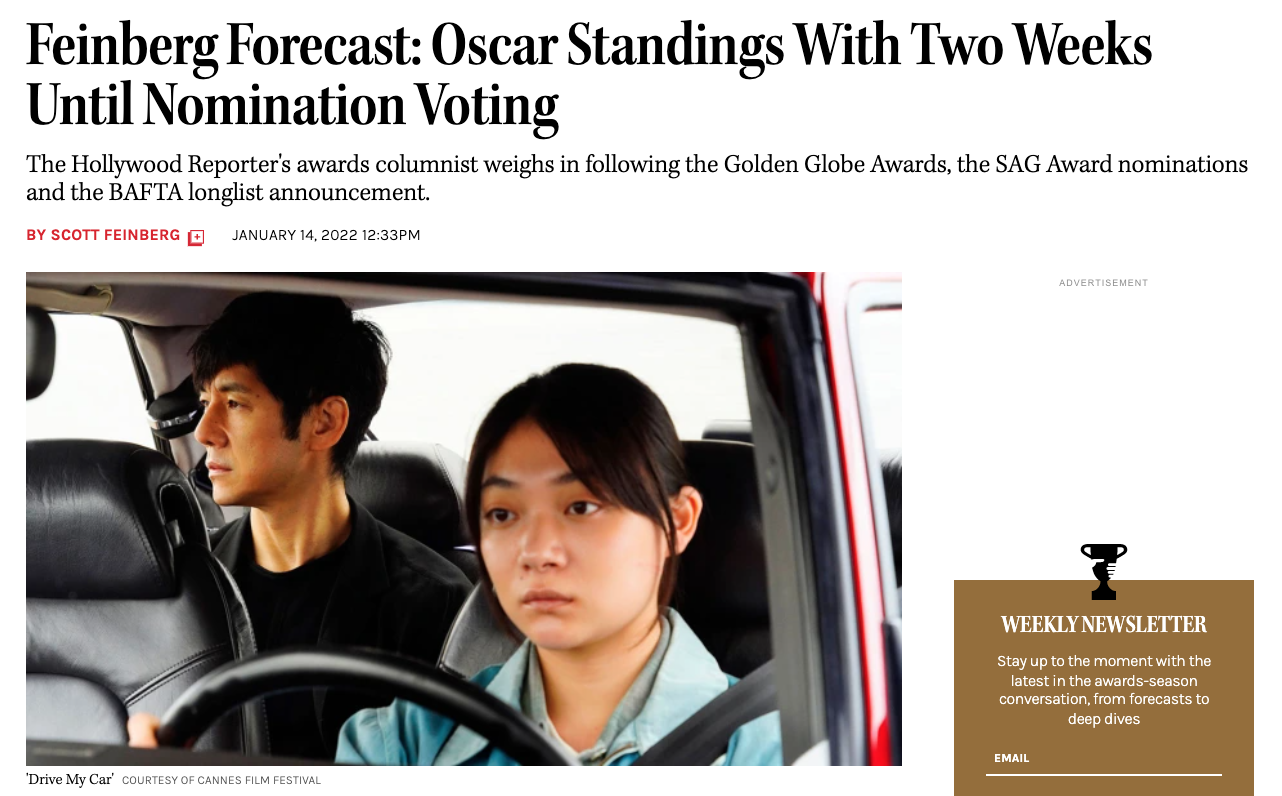 This is fine and good except for the fact that both of these films are (a) homework, (b) depression pills and/or (c) detention class films that you need to endure because they’re well crafted and their directors (Jane Campion and Ryusuke Hamaguchi, respectively) are justifiably respected.

Bottom line: Snootie favorites are to be regarded askance unless HE agrees with them. The snooties often convey excellent taste but they also have a way of bringing everyone down or at least boring us to tears. The snooties are an across-the-board problem now…they’re knowledgable and sophisticated and a pain in the ass. I’ve said this many times but we all need to recognize that the snooties live in their own cloistered little realm, which is a polite way of saying Camp Rectum.

And as far as Spider-Man: No Way Home is concerned they’re too snobby and haughty to acknowledge the obvious, which is that the second hour of that recent Sony release delivers something emotionally extraordinary, and in so doing has generated the kind of once-in-a-decade response that is already the stuff of box-office legend. The snooties deserve community condemnation for looking down their noses at this film.

As far as the Best Actress race is concerned, the snooties (in this case the National Society of Film Critics and the Los Angeles Film Critics Association) have been correct in declaring that Penelope Cruz‘s performance in Parallel Mothers is the year’s best. And so in this respect Feinberg is once again dead wrong in stating that Cruz is a Best Actress “possibility”, and behind CODA‘s Emilia Jones yet…c’mon!

One of Feinberg’s Best Actress “frontrunners” is completely erroneous, and I’m speaking, of course, of Spencer‘s Kristen Stewart. In the wake of the SAG nomination blowout she’s totally and completely finished…just ask Clayton Davis! C’mon, Scott…put Cruz into KStew’s slot!

The other four frontrunners are Being the Ricardos‘ Nicole Kidman, The Lost Daughter‘s Olivia Colman, House of Gucci‘s Lady Gaga and The Eyes of Tammy Faye‘s Jessica Chastain. I find it deeply, horribly depressing that Gaga might win, but the lowlifes (i.e., SAG-AFTRA) love her to death. The most likely winner, I suppose, is Kidman, who was pretty good as Lucille Ball, the only problem being that her features look like carved porcelain soap.