In his latest [1.13] Substack rant David Poland went after Peter Kiefer and Peter Savodnik‘s “Hollywood’s New Rules,” which was posted on Bari Weiss‘s Common Sense Substack. It was excerpted in a 1.11.22 HE article titled “Hollywood Is A Woke Prison Colony.”

HE comment #1: Weiss is not part of what Poland calls the “right-wing managerie.” She is a sensible centrist, which is very slightly to the right of a sensible left-leaning moderate, which is what I call myself. Poland knows that today’s rightwing menagerie is a complete insane asylum, and that Weiss’s anti-woke postures hardly qualify as right-wing credentials. Sensible people of all beliefs and persuasions despise wokesters. The right has tried to adopt or co-opt woke loathing as their own brand, but they’re just hitching a ride.

HE comment #2: Poland allows that Keifer and Savodnik are correct to a certain degree. That is because, as Poland writes, “there is a thing going on” in this town, and “a lot of anxiety among the previously and currently empowered” and “there is a lot of scarlet lettering going on, especially [on] Twitter.” Gee, David…no shit? By “scarlet lettering” Poland means cancelling and Donald Sutherland banshee-shrieking and Robespierre finger-pointing — i.e., “the terror.” Poland knows full well that this same exact shit happened in Paris between 1793 and ’94, and in Hollywood during the red scare period of the late ’40s and ’50s. He knows this as well as you or I do, and he prefers to call it “scarlet lettering.” Nice tippy-toeing, ya candy-ass. 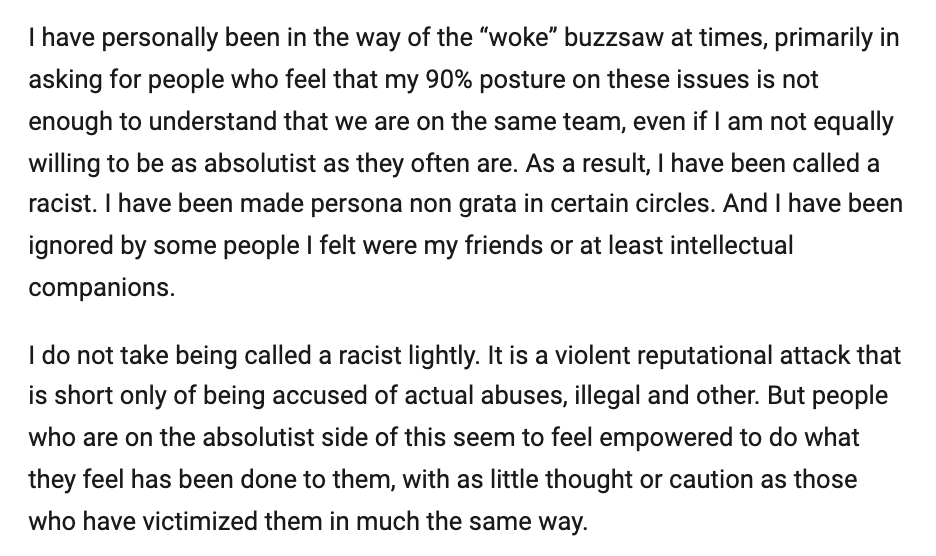 HE comment #4: And I admire the fundamental human decency conveyed in this portion of Poland’s piece. It follows that no one should hold his or her breath while waiting for this to happen. Not in this fucking town.