From Kyle Buchanan’s 5.27 Joaquin Phoenix interview, titled “Joaquin Phoenix Is an Action Hero Now, But He’s Keeping His Belly“: “Lynne Ramsay’s You Were Never Really Here is about a hammer-wielding, battle-scarred war veteran who rescues girls from a sex-trafficking ring, but you’ll know it’s different from a traditional action thriller as soon as star Joaquin Phoenix takes off his shirt.

“Phoenix is no stranger to rocking a dad bod onscreen, but this is something different — a rough-hewn physique that uses shirtless scenes to tell the story instead of simply serving as a glory moment for an actor’s vanity. Somewhat slimmer and clad in a dress shirt and tie, Phoenix explained to me today at the Cannes Film Festival (where You Were Never Really Here just premiered) how he conceived the character. ‘I thought he should be as big as possible, but I also didn’t want the standard Hollywood body for getting big,’ Phoenix said. ‘He’s somebody who’s mid-life and has kind of fallen off in some ways.'”

Phoenix translation: “I went through living hell to get rid of my pot belly for Her, and I just couldn’t do that again. I really couldn’t. So I figured out a rationale for keeping those rolls of fat, and Lynne Ramsay, bless her conniving soul, went along with it. The key to the whole thing was telling everyone that I hit the gym every day while preparing for the role. That removed the dissolute, gone-to-seed aspect.

“I had a mild flabby pot in Inherent Vice (’14), and a really serious one in Woody Allen‘s Irrational Man (’15) and the same old flabbola in You Were Never Really Here. You’ll have to wait and see if I’m rocking the belly when I play Jesus in that Mary Magdelene film, but why not?

“The bottom line is that I’m a beefy, flabby, pot-bellied actor. It’s not so much my character who’s mid-life and kind of fallen off in some ways — it’s me who’s going through that and showing that. I’m not Gary Cooper or Cary Grant or Burt Lancaster in the ’50s…I’m working my way to becoming Marlon Brando when he made Superman. The question isn’t ‘how large will my pot belly get?’ but ‘how Brando-ish or Jabba the Hut-ish will I become as I get older and older?'” 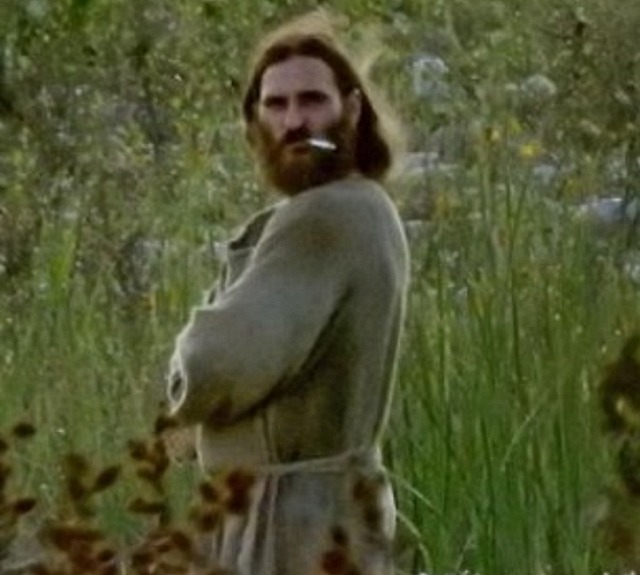