Yesterday I posted about a photo of Malia Obama and a gangbanger cosplay companion, and titled it “Will You Look At This Guy?” The usual HE comment-thread bullshit prevailed, mainly accusing me of being grumpy and out of touch, etc. Bobby Peru wrote that “there’s nothing wrong with how [this guy] looks or what he is wearing, and to call him a ‘gangbanger’ is a cliche and says more about you than him. You really, really don’t want to be in this modern world (or with the people in it) anymore, do you?”

I responded within the thread, but for the sake of emphasis here’s HE’s front-page reply to Peru and the other piss-sprayers out there:

Don’t try to crap a crapper, Bobby Peru. I’ve been all around this great big world for decades and I’ve seen all kinds of garb. Life is choices and this guy is definitely projecting an allegiance with the mindset of Los Pelones. The Mexican mafia thing is his adoption or creation, not mine.

Whatever his actual social background or scholastic aspirations or core convictions or deep-down identity**, he’s saying that the sartorial guise of certain inner-city Latino dudes — shaved head, sandals, baggy pants, ugly K-Mart hoodie…his idea is to project a support of or a basic agreement with big-city youths who dress like this all the time. 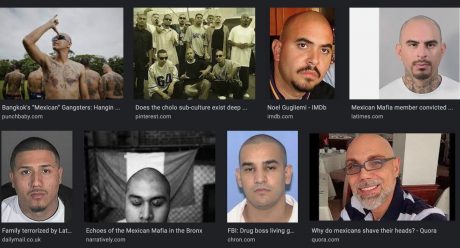 It’s a bottom-of-the-social-barrel aesthetic — a form of play-acting or cosplay…and truly, deeply repellent.

Certain Zoomer dudes have been too sartorially consistent for this statement to be accidental.

There are all kinds of creative ways to convey a sense of style or to project some kind of flair or attitude or personality, and yet this guy is saying “I have seen low-rent, shaved-head Latino high-school youths on the bus in shitty areas of Miami or St. Louis or Oakland or East Los Angeles…guys with that shaved head thing, man…a shaved head and a K-Mart bargain basement mark-down aesthetic…the absolute ugliest threads ever worn in the history of human culture.

“And I’m choosing this K-Mart ugliness because it means something to me…I relate to the mindset and lifestyles of the social flotsam, the empty Coke bottles, dudes without a fucking clue or much of a developed mentality…obviously I have something on the ball or I wouldn’t be hanging with Malia but nonetheless I feel this kinship with the dregs of society…guys with shaved heads and tats and machismo but not much edge or taste…that’s me. I feel it, I get it, I embrace it.” 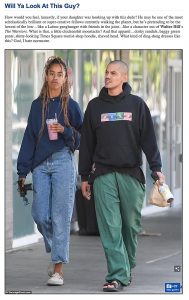 ** His name is Dawit Eklund, and he’s 33 — 9 years older than Malia. Excerpt: “Eklund is the son of retired State Department officer Jon Eklund, 72, who worked at several US embassies in Africa and his Ethiopian wife Yeshi, 66. Dawit is co-founder of Washington, D.C.-based record label 1432 R, which specializes in Ethiopian music.”