However Michael Mann‘s Public Enemies winds up faring commercially and critically, Marion Cotillard‘s performance as Billie Frechette, the girlfriend of Johnny Depp‘s John Dillinger, is an award-quality nail-down. No dramatic actress in recent memory has conveyed as much intestinal steel, and it’s all in her eyes. In each of her scenes they have a straight-from-the-shoulder, no b.s. quality. Every time you look at those watery French peepers and think, “God she’s beautiful,” a subsequent thought happens a split second later: “Man, she’s tough.” 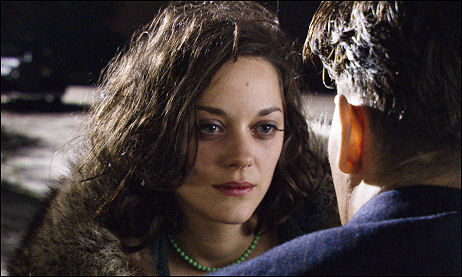 Even when Cotillard visibly melts at the end when Stephen Lang‘s G-man character delivers the final line (in what is easily the most moving scene), she does so with remarkable subtlety, like a survivor, like a woman who knows from dignity.

I came to this thought after reading Mark Harris‘s 6.28 N.Y. Times profile of Mann and the film, and particularly by this passage about Cotillard:

“[Mann’s] movies are known for many things, from technological virtuosity to narrative complexity, but prominent roles for women are not among his trademarks. The character of Billie Frechette is something of an exception. Several American actresses wanted the part; Ms. Cotillard won it even though her English was less than rock steady. ‘But she’s ferocious,’ Mr. Mann said. ‘She’s so focused and artistically ambitious that you knew that come hell or high water she was going to get there.'”

In short, Cotillard looks to me like a lock for Best Supporting Actress contention. Lang’s screen time is perhaps a bit too brief to warrant consideration but the way he handles that final scene with Cotillard is nothing short of beautiful. Another supporting standout is Stephen Graham‘s portrayal of Babyface Nelson — a screaming tempest, a madman with a tommy gun….”hey!”