Shelter From The Storm

In Jason Reitman‘s Up In The Air, airports are cavernous antiseptic places in which people like George Clooney‘s Ryan Bingham feel very much at home. Comforted, even. That’s my feeling also. No man-made atmosphere makes me feel quite as serene as an airport. When I’m waiting for a plane, I mean. (And after I’m through the security scan.) A blissful feeling of being neither here nor there. All my cares and anxieties suspended. It’s actually kind of beautiful.

I know and accept, of course, that airport environments are no substitute for anything, least of all the real rock ‘n’ roll of life. I only know what I feel when I’m inside them. I’m in a kind of womb — a place in which the normal heave and pitch of things doesn’t happen or disturb. The appointments, challenges, pressures, deadlines — all that will surround me and more after I’ve landed. Expected, understood. But what a charmed feeling it is to be within an airport with all of that stuff outside, and with nothing to do inside but chill. I especially love three- and four-hour layovers. I adore browsing around, having a cafe au lait, leafing through magazines, looking at the hundreds of travellers. (Especially the women.)

I feel especially calmed by airports in Europe. Especially those in Germany and Switzerland. Maybe because the wifi is always fast and accessible. And because the technologies in both countries always seem to be state of the art or even ahead of the game. I guess I’m mainly thinking of Zurich Airport. I could live at Zurich Airport — live in an actual apartment there, I mean — and almost be happy. I could almost die there. Tony Gilroy used it as a backdrop in Duplicity (just an exterior shot, actually — the interiors were shot in Newark). And of course, Roman Polanski was arrested there yesterday. What a nice place to be cuffed and kept in a holding cell. I mean that. 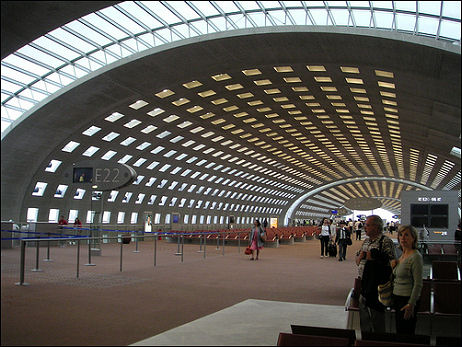