Here’s an expanded, more particular rewrite of my brief Cannes reaction to Jane Campion‘s Bright Star (Apparition, 9.18). I’m running this as an accompaniment to the re-tooled trailer (i.e., the original narrator having been dumped) that recently posted.

Bright Star is about the subdued and conflicted passions that defined the brief love affair between poet John Keats (Ben Whishaw) and seamstress Fanny Brawne (Abbie Cornish) from 1818 until Keats’ death, at age 25 from tuberculosis, in 1821.

By Campion’s particular scheme it’s been done quite perfectly. I was especially taken with Greig Fraser‘s Vermeer-lit photography, which reminded me of John Alcott ‘s lensing of Barry Lyndon. It’s part of the film’s immaculate fealty for the textures and tones of early 19th Century London, and a devotion to capturing the kind of love that is achingly conveyed in hand-written notes that are hand delivered by proper young fellows in waistcoats. You know what I mean.

But it struck me nonetheless as too slow and restricted and damnably refined. I looked at my watch three times and decided around the two-thirds mark that it should have run 100 rather than 120 minutes. I know — a typical guy reaction, right? The pacing is just right for the time period — it would have felt appalling on some level if it had been shot and cut with haste for haste’s sake — but there’s no getting around the feeling that it’s a too-long sit.

This, I feel, is primarily because there’s no discernible heat in the Keats/Brawne relationship. Their love affair is extremely earnest and soulful as far as it goes, but it seems way too too repressed. Yes, I know — this is how love affairs more or less were in the early 19th Century. Notions of propriety and appearances were always paramount. But there’s no shaking the feeling that neither Keats nor Brawne seem to know the first thing about carnal splendor. Not even in their imaginings, I mean.

There’s a passage in Keat’s Wikipedia bio claiming that the posthumous publication of love letters between Keats and Brawne “scandalize[d] Victorian society.” There’s also a reference to Brawne’s “rather promiscuous reputation.” There is nothing in Bright Star that even alludes to this alleged reputation, and there’s certainly nothing in the depicted ardor between Keats and Brawne that is remotely hothouse. It’s all hat, no cattle. 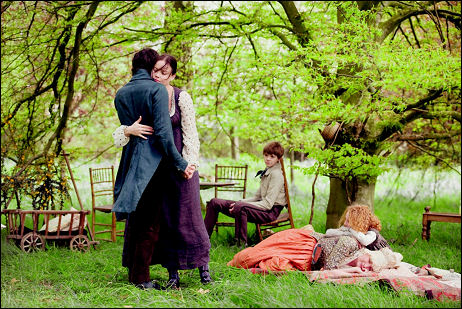 Whatever the truth of the nature of their real-life relationship, Campion chose to keep it all chaste and contained.

As Keats’ friend and financial supporter Charles Armitage Brown, Paul Schneider quickly becomes infuriating. Brown is straight but he resents Fanny/Cornish with the emotional frenzy of a gay man fighting for the attentions of a sometime male lover, and he boorishly gets in her face each and every time she tries to speak to Keats. He’s an obnoxious dog. After a half hour I wanted him killed.

I also began to dream about someone besides Cornish playing Brawne. She’s a skilled actress who gives herself over to the life and mind of this 19th Century seamstress, but bit by bit and scene by scene I began to resent her somewhat chubby balloon face, and how her hair pulled tightly into that prudish bun only accentuates this. Cornish began to almost seem too big for Whishaw. Her head certainly seemed a bit heavier and thicker than his, and I began to wonder if she physically outweighed him. I began to imagine wrestling matches between the two, and the look of triumph on Cornish’s face as she pins this little candy-ass to the floor.

Bright Star is basically a Masterpiece Theatre thing that my mother will love. I’m not putting it down on its own terms. I mostly felt admiration for Campion’s careful arranging of the elements. But I finally found it a bit cold and remote, and a bit too long for what it delivers.