I’m kind of Factory Girl-ed out, but a chance to speak with Sienna Miller was offered last week and I said sure, shit yeah. I don’t care what anybody says about the movie — Miller’s performance as the fluttery but damaged Edie Sedgwick is a hardcore burrow and totally bulls-eye. And it’s led her, at age 25, to a key realization: “I’m not good at being ‘the girl’, I figured out….it’s got to be more character-y.” 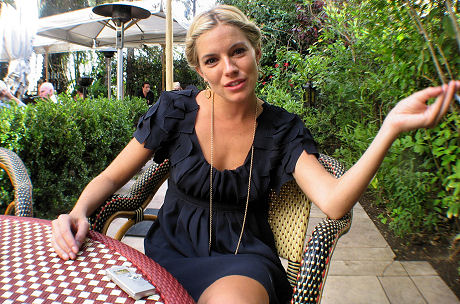 Every actress in the world realizes this sooner or later, of course. The fact that Miller woke up to it at age 25 (or 24, presuming it sank in sometime early last year) is the noteworthy thing. A lot of actresses who also happen to be very hot blondes tend to wait until they hit their 30s or sometimes even later to absorb this attitude.

Miller, in any case, has played five character-y parts in five films over the last year and a half. Or at least, parts that seem angular in some way, shape or form, to go by their descriptions.

Edie Sedgwick in Factory Girl was first, I think. Then a soap star named Katya being interviewed by a fading political journalist (Steve Buscemi) in Interview, which Buscemi directed. (It will debut on Saturday, 1.20, at the Sundance Film Festival.) A newlywed in Gregory McKenzie‘s Camille, opposite James Franco. An ethereal sort named Jane Bellwether in Rawson Marshall Thurber‘s The Mysteries of Pittsburgh, which costars Jon Foster, Nick Nolte, Peter Sarsgaard and Mena Suvari. And a cameo in Matthew Vaughn‘s Stardust, a romantic fantasy costarring Claire Danes, Robert De Niro and Michelle Pfeiffer.

Her next film, she said, is Charles Shyer‘s Father Knows Less, in which she’ll play the daughter of Dustin Hoffman and Diane Keaton. (Shyer told me a few weeks ago that he hates this title and that he’ll come up with something better eventually.)

We sat down in the outdoor patio area at the Chateau Marmont yesterday afternoon. It lasted about 30 minutes. Here’s the mp3 file. Miller looks great (she was wearing a killer dark-blue Prada dress — check out the photos) but also strikingly unlike Ms. Sedgwick, which is obviously a tribute to the transformative nature of her craft. She also showed up at last night’s party at Drago in Santa Monica for Emilio Estvez and Bobby.