Partial transcript of 11.2 Sam Harris “Making Sense” podcast, about why so many people support the beast:

“How is it possible that [roughly 40%] of America admires or at least supports Donald Trump? He’s been described as a master persuader, but I’ve found Trump to be among the least persuasive people I’ve ever come across. I see on obvious con man, an ignoramus…his efforts to appear credible often make him look ridiculous and even deranged. And yet [nearly half] the country views him very differently. And [I’ve begun to] understand how he is supported because of his flaws, rather than in spite of them.

“He’s a paragon of greed and narcissism and pettiness and malice. Real malice. A man who wears his hatred on his sleeve. And for a man who demands loyalty from those around him, he is an amazingly disloyal person. All of this is right on the surface. And so his appeal has been a total mystery to me. But I believe I have now solved that mystery.

“The essence of Trump’s appeal is best understood in comparison with the messaging of his opponent on the left.

“One thing that Trump never communicates is a sense of his moral superiority. The man is totally without sanctimony. He never communicates that he is better than you. Because he’s not, and everyone knows it. The man is just a bundle of sin and gore, and never pretends or even aspires to be anything more. And because of this, because he’s never really judging you, he offers a truly safe base for human frailty. And hypocrisy. And self doubt.

“Trump offers what no priest can offer. A total expiation of shame. His personal shamelessness is a kind of spiritual balm. Trump is Fat Jesus. “Grab ’em by the pussy” Jesus. An “I’ll eat nothing but cheeseburgers if I want to” Jesus. “I wanna punch them in the face” Jesus. “Go back to your shithole countries” Jesus. A no-apologies Jesus.

“What are we getting from the [wokester] left? Exactly the opposite message. Pure sanctimony. Pure judgment. You are not good enough. You’re guilty not only for your own sins, but for the sins of your fathers. The crimes of slavery and colonialism are on your head. And if you’re a cis white heterosexual male, which we know is the absolute core of Trump’s support, you’re a racist, homophobic, transphobic, Islamophobic sexist barbarian. Tear down those statues and bend the fucking knee.”

In other words, Harris is saying, the wokesters are almost as much of a cancer and a pestilence as Trump. 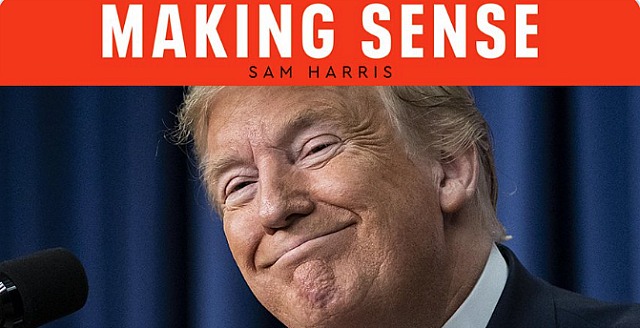